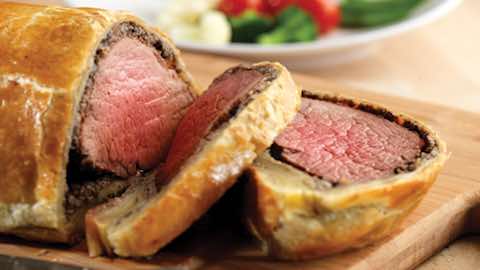 One of my favorites, always worthy of revival, is beef filet baked in puff pastry.

"Ah, that's beef Wellington," I can almost hear you saying, referring to the classic British preparation named in honor of the Duke of Wellington, who defeated Napoleon in the Battle of Waterloo in 1815. The dish became popular at dinner parties across America during the 1950s and 1960s, and was a White House favorite of Richard Nixon. To this day, it keeps popping up regularly like, well, Punxsutawney Phil.

And, yes, the recipe I share here resembles beef Wellington. But in fact, for centuries European chefs have cooked beef wrapped in pastry, a preparation the French call filet en croute, beef in a crust. The steak in such recipes is usually topped with rich foie gras (fattened goose liver) or pate before it's wrapped in puff pastry and then baked.

While I like that version, I prefer to replace the liver or pate with duxelles, a cooked mushroom paste that, to my taste, complements rather than competes with the flavor of the beef.

Another traditional complement to beef cooked in pastry is a rich sauce.

The traditional choice is Bearnaise, an emulsion of egg yolks and butter similar to Hollandaise but flavored with shallots, vinegar, and fresh tarragon. In its place here, I offer an easier but no less delicious Madeira wine sauce.

By now, you might be thinking that this all sounds a bit complicated. In fact, my version is remarkably easy. I prepare it in individual portions rather than as one large pastry-wrapped steak that you have to carve at serving time, hoping it won't fall apart.

You don't have to make the pastry from scratch, either, since excellent ready-to-use puff pastry can be found easily in the freezer case of many markets. You can assemble the individual portions several hours ahead and keep them refrigerated, brushing them with their egg wash just before you bake them.

The results will be so good that, regardless of the weather, you'll feel like springtime is coming soon.

Serves 6 as a main course

In a large skillet over high heat, melt 3 tablespoons of the butter.

As soon as it begins to foam, add the steaks and saute them until lightly colored, about 30 seconds per side.

Transfer them to a plate and set aside to cool completely.

Add the remaining butter to the skillet, reduce the heat to medium, and saute the shallots until fragrant, about 30 seconds.

Add the chopped mushrooms, thyme, and bay leaf and cook, stirring frequently, until all the liquid given up by the mushrooms evaporates, about 10 minutes.

Stir in the cream and the salt and pepper to taste, and continue cooking over medium heat, stirring frequently, until a thick puree forms, 5 to 7 minutes more.

Transfer to a bowl and leave at room temperature to cool.

Divide the pastry into 6 equal portions.

On a lightly floured board, roll out each portion to form a rectangle 1/4 inch thick and about 6 by 12 inches.

Place each steak on one side of a pastry rectangle, leaving enough room to fold the pastry over it.

Spread the cooled mushroom puree evenly over the tops of the steaks.

Brush the edges of the pastry with the beaten egg and then fold the pastry over the steaks and shape it to their contours.

With a small, sharp knife, cut away the excess edges of the pastry and, if you like, use them to make simple decorations on top, securing them with a dab of the egg wash. With the knife tip, cut a slit for venting steam in the top of each pastry packet.

Brush the packets evenly with the remaining egg.

Place the packets on a nonstick baking sheet and bake until the pastry is golden brown, 15 to 20 minutes.

To serve, transfer each portion to an individual heated serving plate.

Spoon some of the Madeira sauce around each portion and pass the remaining sauce at the table.

In a saucepan, bring the Madeira, shallots, and thyme to a boil.

Reduce the heat and simmer briskly until only 1/3 cup remains, 7 to 10 minutes.

Add the broth, raise the heat to medium and continue to boil until slightly thickened.

Whisk in the butter.

Season to taste with salt and pepper.