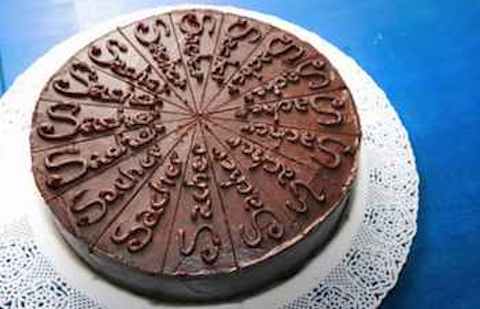 You still have time to plan, shop for, and prepare a spectacular dessert for your Christmas dinner. It's easy if you make the recipe I share here for Sachertorte, a rich, beautiful Austrian layer cake that's one of the world's greatest chocolate desserts

Sachertorte is a rich Austrian treat

You still have time to plan, shop for, and prepare a spectacular dessert for your Christmas dinner. It's easy if you make the recipe I share here for Sachertorte, a rich, beautiful Austrian layer cake that's one of the world's greatest chocolate desserts.

Sachertorte gets its name from Franz Sacher, who in 1832 was a 16-year-old apprentice pastry chef in the kitchen of Prince Metternich when he was asked to make a dessert to impress visiting dignitaries. His dense, bittersweet-chocolate cake with a bittersweet-chocolate glaze won raves, and Sacher eventually went on to open his own delicatessen and winery in Vienna. His son Eduard later perfected his father's recipe while training at the city's famous Demel pastry shop and cafe, and then eventually opened Hotel Sacher in Vienna.

In the 1950s, a lawsuit raged between Demel and the Hotel Sacher over which place had the right to claim it served the "original" Sachertorte. Arguments focused on such details as whether the cake was made with butter or margarine and how many layers of apricot jam it had. In the settlement, rules too detailed to explain here were established to differentiate between the two versions and give both parties some sort of bragging rights.

That's part of the reason why my recipe is called "Wolfgang's Sachertorte." It's my own version, which uses bittersweet chocolate in place of the cocoa powder called for in the original recipes. Why? Because, to tell you the truth, I've found some of the slices of Sachertorte I've eaten in Austria (I won't say where) to be a little dry for my taste. The cocoa butter in the chocolate yields moister results and even more intense chocolate flavor; use a good brand of bittersweet, whether imported (such as Callebaut from Belgium or Valrhona from France) or domestic (such as Scharffen Berger from Berkeley, Calif.).

To make my Sachertorte, you'll need a 9-inch (22.5-cm) springform pan, the kind with a separate bottom and side with a metal clip that opens to make it easy to keep the rich-yet-delicate cake intact when you unmold it. Good kitchen-supply stores carry them. (Let me suggest that you pick up two, in case you decide to make a double batch of the cake!)

Although the steps are fairly simple, you'll need several hours to make the cake between all the melting, beating, mixing, baking, cooling, assembling, and chilling. So you'll have to find the time during an afternoon, evening, or morning. The good news is, with all its butter and chocolate and jam filling, the Sachertorte stays moist and delicious for several days if stored covered in the refrigerator. So you can go on celebrating long after the last present is unwrapped.

Preheat the oven to 350 degrees F. Butter and flour a 9-inch springform pan.

For the cake, bring 2 inches of water to a simmer in a medium saucepan. Put the chocolate and butter in a heatproof bowl large enough to fit inside the rim without touching the water. Melt, stirring, until smooth. Set aside to cool.

In a stand mixer with the wire whisk attachment, or in a mixing bowl using a hand-held electric mixer, on medium speed beat the yolks with 2 tablespoons of sugar until the mixture looks ribbony. Beat in the melted chocolate-butter mixture until fully incorporated. Set aside.

In another bowl, using an absolutely clean whisk attachment or beaters, beat together the egg whites and salt until they form softly drooping peaks. Continue beating while slowly pouring in the remaining sugar, until stiff peaks form. With a rubber spatula, fold in the flour.

Add one third of the whites to the chocolate mixture, folding in gently. Then, gently but thoroughly fold in the remaining whites. Pour and scrape the batter into the prepared springform pan.

Bake for about 40 minutes, until a paring knife inserted into the center comes out clean. Remove from the oven, put on a wire rack, and carefully remove the rim. Leave the cake to cool completely.

For the filling, put the apricot preserves in a food processor and process until smoothly pureed. Pulse in the brandy. Transfer to a bowl and set aside.

To cut the cake into layers, horizontally insert 8 toothpicks equally spaced halfway up all around its side. Following the toothpicks, use a long, sharp, serrated knife in a gentle sawing motion to cut two equal layers, turning the cake as necessary while slicing. Carefully slide a rimless cookie sheet or clean, sturdy cardboard under the top layer and lift it off. Remove the toothpicks.

With a spatula, spread the bottom layer with two-thirds of the apricot filling. Slide on the top layer. Evenly spread the top and sides with the remaining filling. Chill for at least 30 minutes.

For the glaze, melt the chocolate and butter in a bowl over simmering water the same way you did for the cake batter. In a small saucepan, bring the cream to a boil. Stir into the melted chocolate. Set aside to cool until thick but still fluid. With an icing spatula, spread the glaze evenly over the top and side. Chill for at least 30 minutes.

Before serving, put the cream in a mixing bowl and beat until thick and ribbony. Sprinkle in the sugar and continue beating until the cream forms soft, drooping peaks.

To serve, cut the cake into thin wedges with a sharp knife. Garnish with whipped cream.