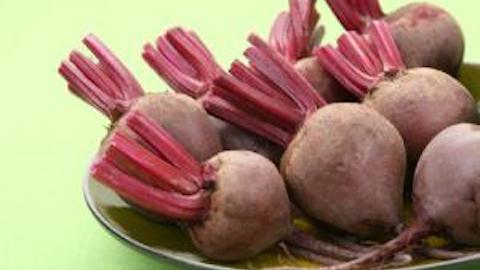 I've found it fascinating to watch how people's tastes have changed regarding certain ingredients during my four and a half decades in the restaurant business.

Some things they wouldn't have dreamed of ordering 30 years ago, they now leap at the chance to enjoy.

Beets are a perfect example.

In the 1980s, I would have had a hard time getting anyone in America to order those sweet red roots. The reason could be found in the fact that, back then, beets as most folks knew them were mainly harvested in early winter when they were overgrown almost to the point of being as big as softballs, then stored in a root cellar.

So their flavor was not be as sweet or refined as it could be, and their texture could be coarse. Add the fact that beets were usually boiled to death, and you had a recipe for everyone's least favorite vegetable. And that doesn't even begin to touch on canned beets!

No wonder the parental order to "Eat your beets!" was synonymous with childhood torture at the dinner table.

I give credit to California cuisine's romance with baby vegetables back in the 1980s.

Grown by local farmers, such young specimens brought wonderful shapes and colors and pure flavors to the dinner table, allowing people to experience fresh produce at its finest.

For beets, that meant harvesting them in summer, when they were tiny, tender, and ultra-sweet. And the same growers who made baby beets available also led the revival of so-called heirloom vegetables, varieties that, although unusually beautiful and delicious, weren't well-suited to mass commercial cultivation. So not only did we begin to see familiar red beets in their immature form but also golden baby beets and even some striped red and white like candy canes.

You can imagine how excited guests in my restaurants were to see such tiny beauties on a plate. And just think of the surprise that came with the first taste, especially when the beets had been not boiled but slowly roasted, a cooking process that helps concentrate and caramelize their sugars.

It wasn't long before beets starred in some of my most popular dishes. To this day, my layered "Napoleon" of beets and goat cheese is a signature menu item at Spago. And at my Wolfgang Puck Bar and Grill restaurants, we serve a very popular baby beet salad that is very similar to the home version I share with you here.

Give it a try as baby beets start appearing in your local farmers' market or food store. I guarantee you that soon no one will have to tell you, or anyone at your table, to "Eat your beets!"

Place the beets in a small roasting pan and pour in enough cold water to reach about one-quarter of the way up the sides of the beets. Cover the pan with foil, place it in the oven, and roast until the beets are tender, about 2 hours. To check for doneness, carefully remove the foil from one side of the pan, opening it away from you to avoid the steam, and gently insert a bamboo skewer into a beet: The skewer should slide in easily. With a large spoon, transfer the beets to a heatproof dish and leave them at room temperature until cool enough to handle.

While the beets are cooking, prepare the Citrus Vinaigrette (recipe follows).

With the help of a small, sharp knife, carefully peel the beets; their skins should slip off easily. Cut larger beets into bite-sized wedges. Put the peeled beets into a mixing bowl and lightly drizzle them with the olive oil and season to taste with salt and pepper. Arrange the beets attractively around the edges of individual serving plates.

Put the arugula leaves in another mixing bowl, drizzle with about half of the Citrus Vinaigrette, and toss well. Mound the leaves in the center of each plate.

Crumble the goat cheese over the leaves and beets and sprinkle with hazelnuts. Drizzle some of the remaining vinaigrette over the beets. Serve immediately.

In a medium-sized saucepan, bring the orange juice to a boil over medium heat, then reduce the heat and simmer briskly until the juice has reduced to about 1/3 cup. Pour the juice into a medium-sized heatproof nonreactive bowl. Let the juice cool to room temperature.

Whisk in the vinegar, thyme, and shallot. Whisking continuously, slowly pour in the olive oil. Season to taste with salt and pepper. Cover the bowl with plastic wrap and refrigerate until serving time.