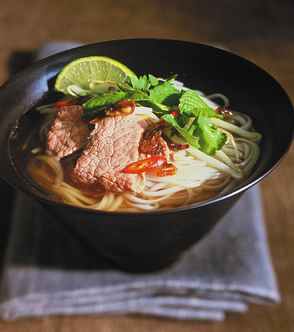 Having written two books on soups, I know my way around a soup pot. I love soups made with any kind of noodles. Rice noodles are the stars in this Vietnamese soup. Look for a good quality beef broth or if you have the time, make it yourself. Pho -- pronounced "fuh," like "duh" -- is a popular noodle soup that many consider to be the national dish of Vietnam.

There are many stories about how Pho became a Vietnamese classic dish. Literary accounts suggest that Pho originated in the north in Hanoi in the mid 1880s. Others debate that the French influence can be seen in the beef broth, similar to Pot au Feu. Saigon popularized Pho in the late 1950s, stamping its flavor profile on the soup. You can see the Chinese influence through such Asian ingredients as star anise pods, cilantro and fresh ginger.

I make this soup for lunch or dinner when I want a one-dish meal with some exotic flavor. If you have the broth cooked ahead, it takes little time to put this together and will be a welcome surprise to your family and friends.

The base is a strong beef broth perfumed with star anise, peppercorns and ginger. Translucent rice noodles float in the bowl, topped by thin beef slices and sauteed sweet and crisp shallots. Some cooks add beef meatballs to the soup.

Sprigs of fresh Thai basil, mint and cilantro always accompany Pho. Bean sprouts, chilies and fresh squirts of lime also are added for a burst of flavor. Some people prefer the hot sauce squirted into the soup, but I like to add a spoonful of hoisin for another layer of Asian flavor. Look for many of these ingredients at an Asian grocery store.

1/2 pound very thinly sliced eye of the round beef (have your butcher slice this for you on the thinnest setting), cut into 2-inch widths or bite size pieces

Hoisin sauce or hot sauce such as Sriracha, for serving

1. In a medium soup pot, combine all of the ingredients for the broth on medium high heat and bring to a boil. Reduce the heat to low, cover and cook for 10 minutes or until the broth is fragrant and infused with the spices. Strain the broth into a medium soup pot. Reserve.

2. Meanwhile, place the rice sticks in a bowl and cover with warm water for about 20 minutes or until very pliable.

3. While the broth is simmering and the noodles are softening, heat the oil in a nonstick skillet on medium high heat. Add the sliced shallots and brown, turning with tongs to evenly brown for about 3 to 4 minutes or until nicely browned. Drain on paper towels and reserve.

4. Have ready 4 large deep soup bowls. Reheat the beef broth on high heat to a boil.

Diane Rossen Worthington is an authority on new American cooking. She is the author of 18 cookbooks (click here)

, including "Seriously Simple Holidays: Recipes and Ideas to Celebrate the Season