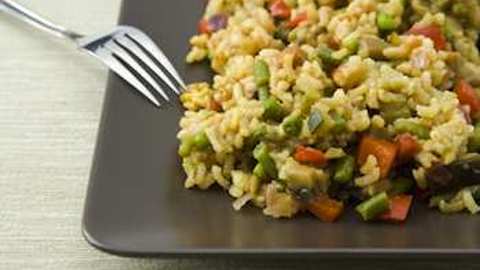 As a chef and restaurateur with many restaurants, I should have a pretty good idea of what my guests will like. But every once in a while, even I am surprised. That's certainly what happened to me immediately following the Oscars ceremony, at the Governors Ball that celebrates and feeds all the hungry stars.

This year, my team and I prepared Dover sole as our featured main course. A hard-to-find, rather expensive fish, it turned out delicious. All the guests certainly enjoyed it.

To go with it, we decided to make a simple paella featuring tender vegetables. Soon, it became clear that the paella was the big hit of the event. Almost everyone asked for seconds and thirds. Days later, several big stars actually came into Spago in Beverly Hills and asked if that vegetable paella was on the menu.

I was sorry to tell them it wasn't. But I'm very happy to tell you that, with the help of the recipe I share here, Vegetable Paella can be the star of your own dining table.

One secret of a great paella is to start with a great stock, so that every grain of rice bursts with flavor. For this particular recipe, I make a quick vegetable stock, simmering aromatic vegetables along with fragrant spices. (If you can find the saffron, which is fairly expensive, use ground turmeric to get the same beautiful golden color, if not the fragrance.) Even though the stock is ready in less than 20 minutes after you start simmering it, you can also make it ahead and refrigerate or freeze it, ready to streamline this already easy recipe even more.

Another key ingredient is sofrito, an intensely concentrated paste of sweet and pungent vegetables that's a standby in traditional Spanish and other Latin kitchens. To make sofrito, all you have to do is cut up the vegetables -- bell peppers, onions, and garlic -- into small, uniform pieces and then saute them slowly and gently, without browning, until they've reduced almost to their very essence.

In both the sofrito and the stock, this version of paella aims to be authentic. But I must admit that my version veers a little from tradition by using easy-to-find long-grain white rice rather than sending you out in search of medium-grain paella rice imported from Spain. If you want to try that rice instead, adjust the proportion of liquid to rice following package directions.

Top the paella with an assortment of in-season vegetables -- whatever kind you like. Poach them in some of the stock, as I do here, or instead saute them in some olive oil.

Then, stand back and get ready to be proclaimed the star of your own kitchen!

First, make the Sofrito. Heat the oil in a saute pan over medium heat. Add the bell peppers, scallions, garlic, and onion. Cook, stirring frequently to prevent burning, until the vegetables have cooked down to a thick consistency almost resembling a paste. Remove from the heat and set aside.

Preheat the oven to 375 degrees F.

Meanwhile, make the Vegetable Stock. In a large pot, combine the scallions, celery, onion, carrot, fennel, tomatoes, paprika, coriander, fennel seeds, pepper flakes, saffron, and granulated onion. Pour in the water. Bring to a boil over high heat, then reduce the heat and simmer for about 7 minutes. Line a strainer with cheesecloth, place over a large mixing bowl, and pour the stock through the strainer. Press down on the solids with a wooden spoon to extract the liquid. Discard the solids. Season the stock to taste with salt.

For the Paella, put the rice in a paella pan or other shallow baking dish. Add 2 cups of the Vegetable Stock and stir in the Sofrito. (Keep the rest of the stock warm.) Carefully transfer to the preheated oven and bake until the rice is tender and all the liquid has been absorbed, 15 to 17 minutes, checking toward the end of cooking and stirring in a little more stock if the rice is beginning to look dry. Remove from the oven and let rest for about 5 minutes before serving.

As soon as you remove the rice from the oven, prepare the mixed vegetables. Bring the remaining stock to a boil in a saucepan. Add the vegetables and cook just until tender-crisp, 3 to 5 minutes.

Transfer the rice to individual serving plates or leave it in the paella pan or baking dish. With a slotted spoon, remove the al dente vegetables from the stock and spread them on top of the rice. Garnish with parsley and serve immediately.