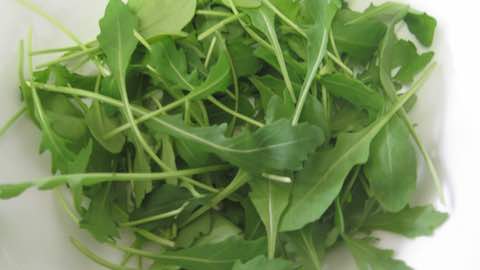 Arugula dates back to Roman times, but it wasn't until the 1990s that this peppery green established itself in high-end U.S. restaurants during the Mediterranean food wave. Grown for its deep green leaves as well as for its seed, which flavors oils, arugula is commonly served in a salad of mixed greens. Incidentally, argula -- also known as rocket, roquette, rugula and rucola -- was thought to have aphrodisiac qualities.

Nutritionally, this rocket shoots for the stars. Aromatic and peppery, with a slight mustard-like flavor, arugula (Eruca sativa) is part of the Brassica family, which includes broccoli, cabbages and mustards, thought to be cancer-preventive. In keeping with its healthy lineage, arugula has the nutrient punch of both its cruciferous relatives and leafy green vegetables. It is rich in vitamins A, C and K, folate and calcium, and is very low in calories. A one-cup serving provides 28 percent of the daily value (percent DV, daily recommendation based on 2,000 calories per day) of vitamin K, which is important for blood-clotting, and 10 percent DV of vitamin A in a mere four calories.

Arugula's natural phytonutrients, called indoles, appear to alter favorably estrogen metabolism, thus potentially reducing the risk of breast cancer. Arugula is high in flavonoids, which have been shown in test tube and animal research to possess anti-carcinogenic activity, as well as antioxidant, anti-inflammatory and antiviral effects. Beta carotene, lutein and zeaxanthin -- arugula's carotenoids -- are powerful antioxidants that are important for health. Lutein and zeaxanthin have been found to reduce the risk of age-related macular degeneration, while beta carotene is protective against sun damage. The antioxidant properties of arugula extract showed protective and anti-ulcer activities against gastric lesions in an animal study published in the April 2009 .

The popularity of arugula unleashed the variety now available in the marketplace. Choose wild arugula, baby arugula, micro-arugula or standard arugula, depending on the boldness of flavor desired. Arugula's untamed bite pairs well with other fresh greens, and its spice is a good foil to many ingredients like goat cheese, citrus and nuts. It's a natural on sandwiches, with pasta or eggs, and sautéed with vegetables. Give this long-known staple of Italian cuisine a try, and see how easily this rocket charms.