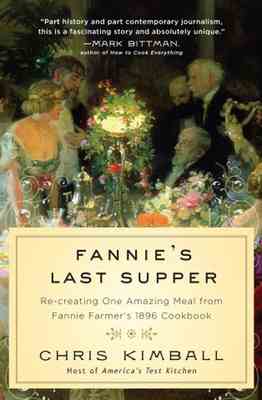 There comes an awe-struck moment in every modern, self-taught chef's life when he or she discovers "The Fannie Farmer Cookbook

In our age we take cookbooks for granted, along with the precise measurements and scientific and technical explanations they impart.

But Farmer's tome was a pioneer of the genre. First published in 1896, it's currently in its 13th edition, which is pretty impressive since its author died in 1915.

Cooking has changed a lot in the century since Farmer first began inspiring young wives and mothers to create lovely meals at home, but her curiosity and devotion to perfecting the science of cooking lives on. She ran the original "test kitchen" at the , constantly reworking recipes until they were just right. Who knows what she would make of all our fancy gadgets and timesaving devices? But after reading "Fannie's Last Supper: Re-creating One Amazing Meal from Fannie Farmer's 1896 Cookbook," I have a feeling she would have enjoyed the relative ease of cooking in a more modern time.

God knows, delivering dinner in the Victorian-era was no small task, as author Chris Kimball discovered. Kimball, the founder of and host of "America's Test Kitchen," is a fitting guide on this adventure. After moving to Boston, he discovered that his new brownstone was in the same neighborhood where Fannie and her family lived, and he found himself wondering what life and cooking was like in her time. He hunted down Farmer's original 1896 "Boston Cooking-School Cook Book" (as her book was originally titled) and decided to try to stage an authentic 12-course Victorian era meal (including of Mock Turtle Soup, Rissoles, Lobster a l'Americaine, saddle of venison, among other delicacies), recreating as many details as possible, from how the food was cooked to how it was served in his own newly restored Boston dining room.

For fans of both food and history, the book delves not only into Fannie's life, but how society was changing and how that affected the dinner table. (They already had Jell-O.) Blended in with the history of the recipes and the era are tales of Kimball's efforts to find the proper ingredients and an authentic period cast iron stove -- which was necessary if the re-creation was to be completely accurate. Each chapter centers around one of the twelve courses, illuminating the issues the research team faced over the course of two years of rigorous recipe testing (led by Erin McMurrer, Kimball's culinary partner). Some recipes worked better than others, tasting better as Fannie set them down, while others would make many a modern chef squeamish to prepare or otherwise needed tinkering to be more palatable to modern diners. But, in the end, managed to make each recipe shine. Or so they hoped, as the date for the big dinner arrived.

What struck me most in Kimball's project is all the time and effort it took to prepare a meal, which is something we clearly take for granted today. Sure, some households had a cook on staff, but by Fannie's time that trend was in decline as the middle class began to rise and ladies had to take the burden of the kitchen on themselves. Not only is a wood-burning stove difficult to use (it constantly needs tending to keep the temperature right), but it also creates a stifling atmosphere. The coolest parts of Kimball's test kitchen ran around 92 degrees -- and that was right by the A/C unit. Kimball and his team weren't sure, even with all the testing, if they could pull off a seamless, 3-hour dinner for 12 people. That's right, 12-courses in three hours, which was the maximum amount of time Victorians gave to completing a dinner party. Any longer would be unseemly, or so Kimball discovered.

Does it come off flawlessly? Well, let's just say the outcome is not the biggest surprise in the world, but that doesn't make "Fannie's Last Supper" a boring read. Kimball takes you to another place in time, bringing the past to life in a fun and interesting way, and he made me wish I were one of the invited guests. I'm not sure I'd be able to eat that much food in one sitting, but I would have loved to try.

All of the recipes created for the dinner are included in Kimball's book, as well as a few others his team tried from the era. While the book inspired me to take my time and truly enjoy my food and its preparation, I'm not sure I'm quite up to the task of recreating these recipes in my own kitchen -- even with my modern equipment. There are just too many steps for me -- another reason I'm glad I was born in the late 20th century when cooking is not such a required skill.

The recipe that follows is one I'm sure I can handle. For some of the other recipes and pictures of the event, check out the website http://www.fannieslastsupper.com/. The entire dinner party was filmed and will be shown on during the 2010 holiday season. Check your local listings.

Combine ingredients and pour over ice to serve. Can be made several days ahead, as it apparently improves with age. Does not need to be refrigerated for storage.