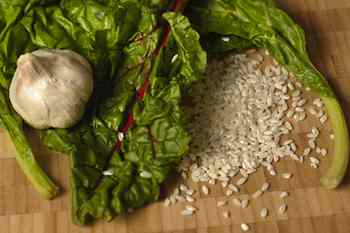 Take a look at your supermarket's display of dark leafy greens.

You'll see bunches of chard, collard greens and kale stacked up several feet high. It's a little daunting when you're cooking for two.

But don't be put off by the volume. What starts as a mountain, cooks down to manageable portions for two.

In fact, the only trick to preparation is carefully washing the greens, which trap dirt. Rinse each leaf separately under cold running water.

For a basic side dish, cook the greens in just the water that clings to the leaves.

You can also include dark leafy greens in soups, stews and skillet entrees.

Because long slow cooking improves the texture and flavor of most dark leafy greens (spinach being a notable exception), the vegetables are a fine addition to risotto. Start by cooking a flavor base of pancetta, garlic and Swiss chard. Add Arborio rice and finish with a flavorful hard cheese.

You'll marvel at how easily a bunch of greens can disappear from the plate.

When shopping for Swiss chard, look for stems that are firm and free of blemishes. Leaves should also be firm and bright green. Don't wash the greens until you're ready to cook. Wrap the stems in a damp paper towel and place the bunch in a loose bag in your refrigerator produce bin. Cook chard within a few days.

Place the bacon, garlic and shallot in a large nonstick skillet. Heat over medium heat until pancetta fat is rendered, stirring occasionally, about 3 minutes.

Meanwhile remove thick stems from chard. Wash chard well and coarsely chop. Add chard to the skillet. Cook for 2 to 3 minutes or until leaves are limp. Add rice and cook 1 minute, stirring frequently.

Coarsely chop leaves; you should have about 4 packed cups. Pour in wine. Increase heat to high and cook for 1 minute or until wine is reduced by half. Reduce heat to medium. Stir in pepper. Add 2/3 cup broth. Cook, stirring occasionally, until broth is absorbed. Add another 2/3 cup broth and repeat cooking and stirring. Add broth a third time. Cook until broth is absorbed. Taste rice. It should be tender, with a little resistance at the center. If rice is too hard, add remaining 1/2 cup broth and repeat cooking. When rice is tender, stir in half-and-half and cheese and allow cheese to melt. Serve immediately.

Note: If desired, use Parmesan instead of Gouda cheese.