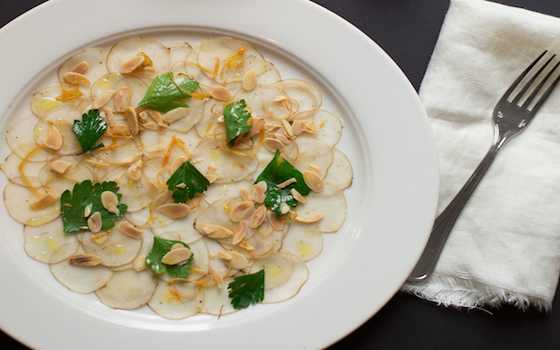 For meatless antipasti, try this hearty but delicious tuber

When I conjure inspiration for a meatless antipasti spread, I think of hearty starches that give hungry carnivores like me something to work with. The Jerusalem artichoke, also known as the sunchoke, is substantial but with a delicate flavor unlike potatoes.

Despite its name, this versatile ingredient has nothing to do with the artichoke. In fact, one theory suggests that the name derives from the Italian word girasole, meaning sunflower, for its physical resemblance. The Italian word was possibly later turned into "Jerusalem" by lazy English speakers who butchered its pronunciation. Later, the "artichoke" was added (on account of similar taste) and the "Jerusalem artichoke" was born.

When purchasing this edible tuber, look for knobby, pink skin, similar to that of ginger root. These knobs are unavoidable and not indicative of quality. However, do avoid soft spots, wrinkles or sprouting in the roots.

Sunchokes keep for a couple of weeks in the refrigerator. However, once prepared, they need to be eaten within a week. The acid in this recipe will prevent discoloration, allowing you to stretch the lifespan a bit.

There's a reason grapefruit is dubbed winter's sunshine when it appears in the dead of the season. A single grapefruit packs a lot of punch as a natural cold fighter, arriving when we're most susceptible to catching illness. The citrus keeps well in cold storage, so it can be found in supermarkets year-round. But growing season peaks from October through May. A tried-and-true indicator of a juicy grapefruit is if it's heavy for its size and has smooth rather than bumpy skin.

If you're not into the rawness of sunchokes in this recipe, you can also serve them as you would potatoes: peeled, boiled and pureed. You can also leave the skin on and fry sunchoke chips. Another of my favorite methods is to poach the sunchoke until tender and then flash-fry it to create a crispy shell around a creamy interior. It is the perfect antidote to winter blues.

Sunchoke Carpaccio with Almonds and Grapefruit

Tear parsley leaves from bunch and add to zest. Add sliced almonds. Grate garlic into the bowl with rasp. Season with coarse sea salt and set aside.

Remove abrasions from sunchokes with a paring knife. Using a Japanese mandoline, thinly slice the sunchokes.

Transfer sunchoke slices to a large bowl and dress with juice from 1/2 grapefruit. Season with salt and freshly ground pepper, and drizzle with extra-virgin olive oil. Toss well (be sure to coat the sunchokes well, to prevent oxidation).

Add a drizzle of extra-virgin olive oil to the almond gremolata. Lay out slices of sunchoke overlapping on a plate. Mix almond gremolata and strew over sunchoke carpaccio. Serve immediately.

Available at Amazon.com: Keepers: Two Home Cooks Share Their Tried-and-True Weeknight Recipes and the Secrets to Happiness in the Kitchen