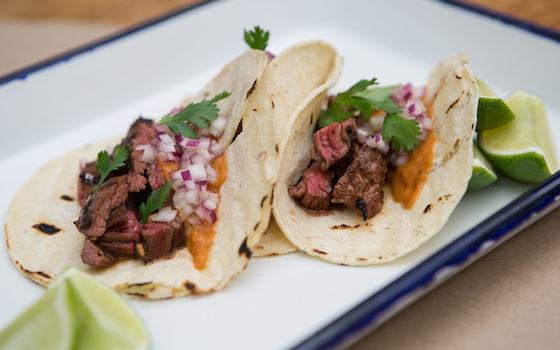 My recent travels to Mexico City reminded me how much I admire classic Mexican preparation in cooking. While I may not be able to recreate the carne asada street taco I had at La Merced Market -- the most perfect I've ever experienced -- I was inspired to whip out my own version that I mastered a few years back.

My Skirt Steak Asada Tacos are a dish I've cooked at tailgates here and there during grill season, and they're the closest recipe to authentic Mexican tacos I've developed. They are assembled the traditional way, with just the meat, some chopped onion and cilantro, and a sprinkling of fresh lime. I also add a pureed poblano sauce for a little extra oomph.

The taco is an ancient tradition with over 500 years of history. More than anything else, the key for Mexican authenticity in this dish is serving your skirt steak asada taqueria style on soft corn tortillas, unlike 80 percent of Americanized tacos. Mexican shops carry authentic tortillas, or you can even make them from scratch yourself using masa harina ("dough flour") and water. Masa harina is most commonly used to make tortillas, but it is also featured in other incredible dishes such as tamales and pupusas.

When making pureed sauces, poblano peppers are one of my favorite varieties to use because they're as flavorful as they are gorgeous in color. Originating in the state of Puebla, Mexico, the poblano pepper is a mild chili pepper that can be consumed cooked or dried but is rarely eaten in raw form. Like many ingredients, the finest quality of texture and flavor in poblano peppers is brought out when added to heat. They are delicious charred, roasted or placed directly over flame and blistered. When dried, this pepper is referred to as the ancho and used in various Mexican and Spanish dishes to add some kick. If you prefer your poblanos to be more on the mild side, a nice trick is to soak them in warm water with a tablespoon of brown sugar for 10 to 30 minutes before draining.

Now for the most important player of the taco: the steak. Carne asada is thinly sliced, grilled beef, traditionally marinated for hours and served with rice and beans on the side. While typically any cut of beef can be butterflied into thin sheets, I am using skirt steak for this recipe to capture that deep, rich flavor I love in authentic Mexican food. Flank steak would be a close second if you are unable to find skirt steak in your local market.

As easy as that, my Skirt Steak Asada Tacos will have you dreaming of Mexico all summer long. Once you get used to this kind of purity, you'll have a hard time dealing with what usually passes for a taco.

1 teaspoon salt, plus more for grilling

3 limes cut into wedges for serving

Place a skillet, preferably cast iron, over medium-high heat. Add the olive oil, and when it gets hot, add the yellow onion and peppers and cook until they soften, about 8 minutes. Add the garlic, chili powder and cumin, and cook 1 minute more. Add the plum tomatoes and salt, reduce the heat to medium-low, and cook for 5 minutes more.

Transfer the mixture to a blender or food processor fitted with the metal blade and pulse until just smooth.

Place the skirt steaks in a sealable plastic freezer bag and add half the puree, making sure they are completely coated. Keep refrigerated, or in a cold ice chest if grilling outside, for up to 72 hours.

When you're ready to grill the steaks, salt them and grill them over medium-high heat, turning once, until they are a deep, rich brown on both sides, about 9 minutes. Transfer the steaks to a cutting board and let rest.

Meanwhile, in a medium bowl, mix together the chopped red onion, cilantro and lime juice.

Cut the steaks into 1/2-inch slices. Put a few slices in a warmed tortilla (can be heated on a warm area of grill) and add a heaping tablespoon of the onion and cilantro mixture. Squeeze some lime over the meat and then add a tablespoon of the pureed sauce. Repeat to make 8 tacos. Eat and smile.