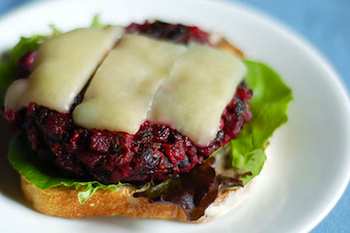 Even before I'd been to the , a celebrated restaurant in my new hometown, Columbus, Ohio, I'd heard about its veggie burgers. "They are unlike any you've ever had," I was promised by vegetarians and non-vegetarians alike. I'll give you one guess what I ordered when I finally made it to the restaurant.

The burger definitely lived up to expectations. Northstar has somehow captured that unique hamburger texture, which is greatly lacking in so very many mushy veggie burgers. The exterior was well seared to give the burger a beautiful crunchy crust and an extra boost of smoky flavor. The interior of the patty was soft and tender, but with enough texture that it actually felt like I was biting into something.

It had a deep, savory umami flavor that contrasted nicely with a slice of provolone cheese, bitter greens and the buttery toasted bun. I could see bits of beet, black bean and brown rice in the mix, but no single ingredient overpowered the other. The overall effect was, quite simply, a burger.

With that visit, I acquired an addiction that was soon edging toward the unhealthy, so I decided to develop a recipe that captured the spirit of the Northstar veggie burger. The key is to dice the beets very small and then cook all the ingredients until they're very tender and soft. Don't be tempted to use a food processor -- that would give you the mushy texture we're trying to avoid.

The other key is to sear the burgers very well in a hot cast-iron skillet to get that flavorful crust. You could also use a well-oiled stainless steel skillet, but a nonstick skillet probably won't get the same kind of crust. If you want to throw them on a grill, cook them in a veggie basket or other grill-top device so the patties don't break and fall through the grates.

One last note: I think the original Northstar burger has about double the amount of brown rice as beets or beans -- that is to say, a large proportion of rice as compared to everything else. But in my testing, I ultimately decided that I liked the meatier texture I got when those three ingredients were in more equal proportion. I've written the recipe as such, but if you prefer the crunchier texture of the Northstar burger, just double the amount of rice.

Inspired by the veggie burgers at in Columbus, Ohio

1/2 cup brown rice (doubled if you like more rice)

1 can black beans, drained and rinsed

Bring a large amount of water to a boil. Add a handful of salt and the rice, and reduce the heat to a simmer. Cook the rice until it's a little beyond al dente. You want it a little over-cooked, but still firm. This should take about 35-40 minutes. Drain the rice and set it aside.

Heat 1 teaspoon of olive oil in a skillet over medium-high heat. Add the onion, reduce the heat to medium, and cook until the onions are translucent and softened. Stir in the beets. Cover the pot and cook until the beets are completely tender, stirring occasionally. Add the garlic and cook until it is fragrant, about 30 seconds. Deglaze the pan using the cider vinegar.

Empty the black beans into a large bowl and use a fork to mash them up a bit. Add the cooked rice, the beet and onion mixture, the lemon juice, the remaining 3 teaspoons of olive oil, and all the spices. Stir to combine and then taste for seasonings. Add salt and pepper to taste. Once it tastes the way you like it, add the flour and stir until you see no more dry flour.

Heat a cast-iron skillet over the highest heat. Add a few tablespoons of olive oil -- the oil should completely coat the bottom of the pan. When you see the oil shimmer and it flows easily, the pan is ready.

Using your hands, scoop up about a cup of the burger mixture and shape it into a patty between your palms. Set it in the pan, where it should begin to sizzle immediately. (If it doesn't sizzle, wait a minute or two before cooking the rest of the burgers.) Shape and add as many more patties as will fit in your pan. Once all the patties are in the pan, reduce the heat to medium-high.

Cook the patties for 2 minutes, then flip them to the other side. You should see a nice crust on the cooked side. If they break apart a little when you flipped them, just reshape them with the spatula - they'll hold together once the second side is cooked. If you're adding cheese, lay a slice over the burgers now. Cook the second side for another 2 minutes.

Serve the veggie burgers on soft burger buns or lightly toasted sandwich bread along with some fresh greens.

Cooked burgers should be eaten that same day. You can also save leftover mix in the fridge for up to a week and cook just one or two burgers as you want them.