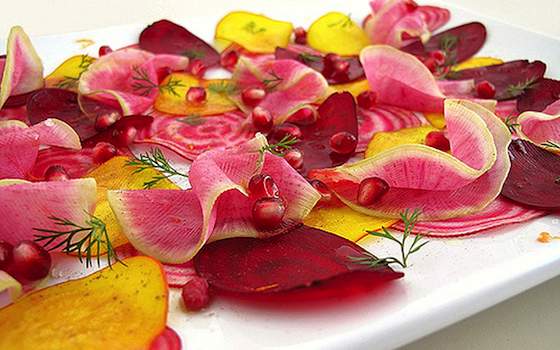 We all heard that from our moms as kids. Unfortunately, it was more often canned beets that we were persuaded to eat. As a curious eater, I've come to appreciate beets in many different preparations. I especially love them roasted in salads. But have you ever thought of eating them raw? Sliced very thinly, beets and other root vegetables, make great salads. Yes, it's possible to slice them thin with a knife, but a mandoline does the job better than anything else to get paper-thin shavings.

In this beautiful salad I combine three different colors of beets, plus a watermelon radish, and add pomegranate seeds for additional ruby color. The radish adds a different type of crunch and hotness. The pomegranate seeds, along with a squeeze of orange juice, add sweetness and tang to the salad. A sprinkling of dill adds green color as well as herbal flavor. After trying this salad, you will be surprised to find how naturally sweet beets taste when eaten raw. They are nature's candy in both taste and color.

Beets are beautiful, jewel-toned root vegetables. They come in deep red, bright pink, golden yellow and white. The pink ones, which are known as Chioggia, resemble a bulls-eye when sliced open. I also like to use long red beets known as slicing beets. They create perfectly sized coins when sliced. I created ovals when I sliced them at an angle.

This salad is not limited to just beets and radishes. Any root vegetable that catches your fancy at the market will work. Carrots and celeriac would make a lovely addition. Fennel and celery, though not root vegetables, would also add unique flavor, crispness and freshness. This salad would make a nice addition to the holiday table or it could replace those canned beets at the Sunday dinner table. Whatever you do, don't be afraid to try beets raw. They might just excite your taste buds.

Note: There's no need to peel the beets for this salad. Scrub them well under running water and scrape of any root whiskers with a knife. Keep some stems attached to use as a handle when slicing on the mandoline.

Using a mandoline on the thinnest setting, slice beets and radish. Start with the radish and light colored beets and end with the dark colored beet, keeping the different colors separate until assembly. Arrange slices on a large platter or shallow bowl. Scatter pomegranate seeds and orange zest over sliced vegetables. Drizzle with orange juice and olive oil. Season with fleur de sel and pepper. Garnish with dill.

Joseph Erdos is a New York-based writer and editor, who shares his passion for food on his blog, Gastronomer's Guide.