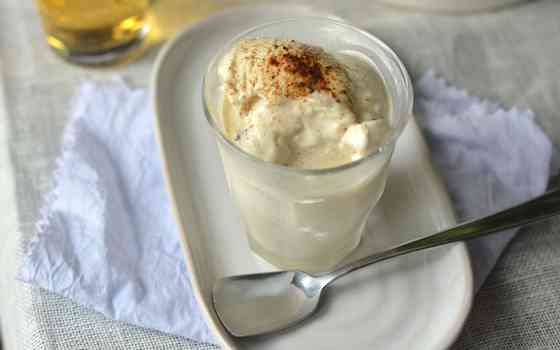 In the mood to mix your nightcap and dessert tonight? Something boozy and sweet -- and brief? Here's just the thing. It's giggle-inducing to call this a recipe; it's more a whisper of a suggestion, a nudge to let you know that, yes, Scotch and ice cream go very well together.

This little dessert is inspired by two things. First, obviously, a classic Italian affogato, where a shot of hot espresso is poured over a lump of ice cream and eaten expeditiously. Part of the pleasure of this dessert is the contrast in hot and cold, bitter and sweet. But the pleasure also comes from eating something that is changing under your spoon, a different bite every second, with coffee running down the ice cream and turning it at the end into a thick puddle of pale espresso-flavored cream.

This version is an affogato one step removed from that espresso-soaked experience, with Scotch instead of hot coffee. I had this at a restaurant in Columbus, Ohio, called . It's just a scoop of good vanilla ice cream, flecked with real vanilla bean, and drowned in a pool of Scotch, with a dusting of espresso bean to echo the original.

It's quite an eating experience. The Scotch isn't hot like the espresso, but it warms you all the way down (in a whole different way), leaving caramel fragrance and the aroma of roasted espresso beans behind.

On the subject of Scotch: I've had this now with several different sorts. At home, we've been drinking a Glenmorangie single malt lately, so that's what I used. At the restaurant they used a blend, Famous Grouse. I like that better in this dessert, partly because it is less expensive and better for blending. I found that the single malt had an edge of aftertaste, too, when eaten with ice cream, that the blended did not.

Pour the whisky over the ice cream in a small glass. Sprinkle with espresso powder and eat immediately.

Some Variations on the Theme:

-- Swirl the Scotch with a tablespoon of amaretto before pouring over the ice cream for a Godfather-inspired dessert.

-- Swirl the Scotch with a tablespoon of Drambuie for a Rusty Nail-inspired dessert.