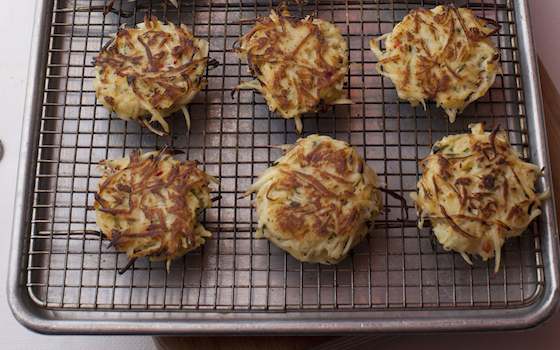 Q: Mario, can you recommend a seasonal side dish for the holidays?

A: A vegetable recipe that tastes of the season but also embraces the themes of the holidays. The dish: salsify frittelle.

Salsify -- also known as the "oyster plant," for its somewhat oyster-like taste-- is a root vegetable of the dandelion family. The plant looks like parsnip or horseradish but is longer and slender. It has dark brown skin and white flesh and tastes somewhat like sunchokes or artichoke hearts. It can be boiled, mashed or creamed for a soup and is available from late summer through February. (Look for it at farmers markets, specialty grocers and markets such as .)

The literal translation of frittelle is fritters or pancakes. (In the northern Italian region of Veneto, frittelle are served as a snack with a glass of wine before dinner.) During this time of year, frittelle sometimes are better known as latkes.

Every Jewish household has a proprietary recipe for latkes.

In my Italian/French/Jewish house, I like to remove the potato entirely in favor to other tuber and vegetable bases. For this Hanukkah, salsify is the perfect root.

In memory of the so-called miracle of lights, many Hanukkah foods are fried. Over centuries, those who observed the tradition of making latkes have developed recipes using ingredients available in the countries in which they lived. Jews who settled in the Middle East or Iberian Peninsula used extra virgin olive oil to fry their holiday foods.

This variety of salsify fritters is quickly fried in olive oil then baked in the oven to finish cooking. The earthiness of the salsify and the aromatics of the herbs make the perfect savory patty for the holiday table.

Like cotechino, the sausage traditionally served at New Year with lentils, the literal roundness of this dish also makes it perfect for a New Year's Eve celebration. It is, quite simply, the all-purpose holiday dish.

Peel the salsify and coarsely grate it on the large holes of a box grater. Place it in a medium bowl and stir in the garlic, chilies, winter savory, mint, eggs and flour. Season generously with salt and pepper, and then form the mixture into 12 medium patties.

Heat the olive oil in a sauté pan over medium heat until just smoking. Add the patties and cook until golden on both sides, about 4 minutes per side. Transfer the fritters to a greased cookie sheet.

Place the cookie sheet in the oven and bake for 15 minutes. Remove, and serve hot or at room temperature.

(Mario Batali is the award-winning chef behind twenty-four restaurants including Eataly, DelPosto, and his flagship Greenwich Village enoteca, Babbo. In this column, Mario answers questions submitted via social media and by people he encounters daily in Downtown Manhattan. Keep asking!)