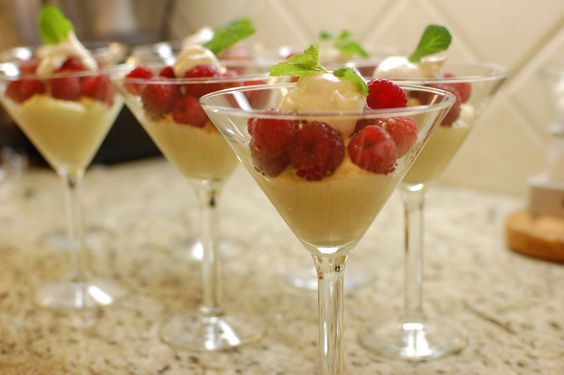 The most popular and classic sweet recipe based on Champagne or other sparkling wines is the rich, frothy dessert known in French as sabayon. That name, in turn, is a French pronunciation of the Italian zabaglione. I have come up with a version you can make ahead that stays stable until you're ready to serve it.

When you're planning dessert for a party, it's a good idea to offer a sweet treat that sparkles. So, why not make a final course in which the star is Champagne?

The most popular and classic sweet recipe based on Champagne or other sparkling wines is the rich, frothy dessert known in French as sabayon. That name, in turn, is a French pronunciation of the Italian zabaglione -- from "to foam" in old Neapolitan.

Whatever you call it, sabayon is one of the most festive desserts you can make. But it's usually something best prepared at the last minute, as anyone knows who has ordered sabayon in a French restaurant, or zabaglione in an Italian trattoria, and been treated to a tableside show as a waiter literally whips it up in a copper bowl over an open flame.

That approach may be impressive, but it's not necessarily practical for a home party. So, some of my Las Vegas chefs and I have come up with a version you can make ahead, combining the traditional sabayon foam with whipped cream to make a cool, creamy dessert that stays stable in the refrigerator until you're ready to serve it.

Both the traditional version and the recipe I share here depend on mixing the three main ingredients -- sparkling wine, sugar, and egg yolks -- the right way, using a double-boiler to provide the gentle heat necessary to cook the whipped yolks without curdling them. But you don't need a special double-boiler -- you can easily use two saucepans that stack snugly one on top of the other. In fact, it's better to make an improvised one by resting a metal mixing bowl on top of a saucepan of simmering water, because the bowl's curved surface enables you to whisk the mixture more thoroughly.

Let me offer here a simple chef's trick to help you know when the egg mixture has cooked sufficiently: When it looks nice and fluffy, run the back of a tablespoon through the mixture. Then, hold up the back of the spoon and blow on it. If the coating remains rather than blowing away, it's done; if not, keep whisking a while longer over gentle heat before testing again.

Once you've cooled down that froth and folded it into the whipped cream, your dessert is ready whenever you want to serve it. For dipping, pass berries or sliced fruit or long cookies such as biscotti for guests to dip as they please -- but also include spoons for purists who want to enjoy the dessert on its own.

And, of course, you might want to offer a semi-sweet or sweet Champagne or sparkling wine along with your sabayon

Put the cream in a mixing bowl. With a hand-held electric mixer on medium speed, whip the cream until it forms medium-firm peaks that droop just slightly when the beaters are lifted out; during the last few seconds, beat in the Grand Marnier. Cover the bowl with plastic wrap and set aside in the refrigerator.

Meanwhile, select a stainless steel mixing bowl slightly larger than the saucepan's diameter, so that it can rest on top of the pan without its bottom actually touching the water. Away from the pan, put the egg yolks and the sugar in the bowl and, with a wire balloon whisk, whisk them together briskly for about 30 seconds. Continue whisking while pouring in the Champagne in a thin, steady stream.

Reduce the heat under the pan to maintain the water at a steady simmer. Put the stainless-steel bowl on top of the pan and, steadying the bowl with one hand protected by a heat pad or oven glove, whisk the mixture briskly and continuously until it triples in volume and is light and fluffy, about 4 minutes. To check for doneness, dip a tablespoon into the mixture to coat its back. Gently blow on the back of the spoon and, if it stays coated, the sabayon is done.

Remove the bowl from the pan and immediately place it inside a larger bowl filled with ice cubes and water. Continue whisking the mixture until it is ice-cold, several minutes longer.

Cover the bowl with plastic wrap and refrigerate until ready to serve. To serve, spoon the mixture attractively into individual bowls. Pass fresh fruit or cookies for dipping.