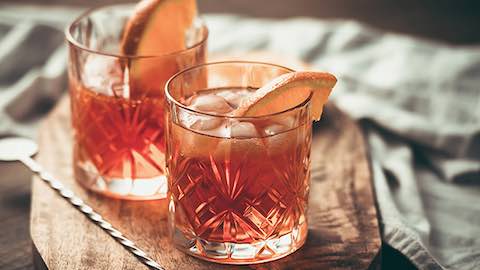 (Family Features) - Cocktail trends may come and go, but one staple remains a fixture on drink menus two centuries after its invention -- the Old Fashioned.

There are many competing stories about the origins of the “first” true cocktail recipe, but nearly all agree that the modern-day cocktail was first mixed in the early 1800s, and the recipe was generally the same Old Fashioned recipe still mixed in bars around the world today: liquor, sugar, water and bitters.

Bourbon is traditionally the spirit of choice for an Old Fashioned, but contemporary versions may substitute virtually any type of liquor, from rye whiskey to tequila to rum. Yesteryear’s sugar cube, served as a lump doused with bitters, has given way to simple syrup, which mixes more easily when served. A twist of citrus zest or a dark cherry are common garnishes in today’s Old Fashioned renditions.

No matter what spirit or style you prefer, there’s one constant that’s crucial to any drink bearing the Old Fashioned name: bitters. For a truly authentic experience, look to incorporate an option like Angostura bitters – an iconic brand that traces its roots as far back as the dawn of the Old Fashioned and has been closely intertwined with the history of the cocktail ever since.

Dr. Johann Siegert, the bitters’ inventor, created the elixir in 19th-century Venezuela while serving as a doctor to soldiers in Simon Bolivar’s army. By 1824, he perfected the formula for “amargo aromatico,” which he initially used to help alleviate the stomach issues of ailing soldiers.

By the mid-1800s, cocktails were steadily gaining favor, and nearly all the early recipes called for bitters. Siegert’s sons seized the opportunity and astutely developed a following for their formula among cocktail lovers.

Today, Angostura aromatic bitters are a classic and versatile ingredient in bars and kitchens alike for their flawless ability to balance a range of cocktails. Bitters provide layers of flavor and complexity through their expertly-crafted combination of aromatic herbs, bark, roots and other botanicals. When it comes to the ingredients in Angostura’s aromatic bitters, the exact formula is unknown, as the recipe has remained a closely-guarded secret since the bitters were created almost 200 years ago.

Consider these tried-and-true takes on the Old Fashioned with four recipes ideal for sipping. The traditional version features bourbon, while three twists on the timeless classic highlight alternative liquors: the Tequila Old Fashioned, the Rum Old Fashioned and the Wisconsin-Style Brandy Old Fashioned.

Serving an authentic Old Fashioned requires more than just the right ingredients: you need the proper bar glass, too. An Old Fashioned is almost always served in a rocks glass, which is a short glass, often with a weighted bottom, designed to hold a shot or two of liquor over ice (or “rocks”). Also known as a lowball, whisky or (aptly named) Old Fashioned glass, the rocks glass typically holds 4-10 ounces.

A wide range of cocktails call for sweet syrup to enhance the flavor of the liquor, and one variety in particular lends a rich molasses note to drinks. Demerara syrup is made using Demerara sugar, a special variety of raw, unrefined cane sugar with large grains and a golden amber hue.

The sugar, which traces its origins to the South American country of Guyana, can be used in place of brown sugar. Though similar, Demerara generally lends stronger caramel, toffee and molasses notes than traditional brown sugar.

If you don’t have any Demerara syrup around, it’s quite easy to make at home and can be used to naturally sweeten a number of drinks, from coffee to cocktails. If Demerara isn’t on-hand, swap for turbinado sugar, brown sugar or table sugar.

Stir to dissolve. Let cool before use.