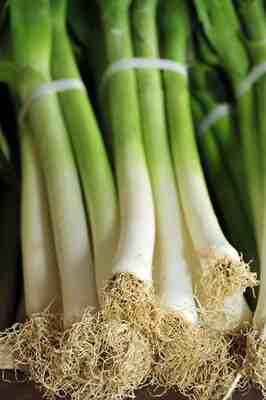 This potato-leek soup recipe with cheddar & bacon is a satisfying and heartwarming cold-weather recipe.

Those two staple vegetables -- both good on their own and also frequent parts of many more complex recipes -- somehow taste especially delicious in partnership. The onion-y flavor of the leeks emphasizes the satisfying earthiness of the potatoes. And the potatoes, in turn, become a canvas that highlights the sweet-yet-pungent flavor of the leeks.

It is no surprise, then, that you find some version or another of this potato-leek soup recipe in many different cuisines, from France (where it is served hot as well as in a finely pureed cold version that goes by the familiar name of Vichyssoise) to Austria and Germany, Holland and Great Britain to America. Some recipes include more potatoes than leeks, others more leeks than potatoes. Some cook the vegetables just in water or with broth, while others add milk or cream. Some call for pureeing the cooked soup to a thick, smooth consistency, while others present a chunkier, more rustic interpretation.

I guess you could say that such versatility is another defining characteristic of some classics -- you can keep playing with them without ever getting bored. That's certainly one more reason why, as someone who always loves to improvise when I cook, I really enjoy leek-and-potato soup.

In the version of the recipe I share with you here, I turn it into a soup that might remind you of a great stuffed baked potato. I enrich it with butter, cream, sharp Cheddar cheese, crispy smoked bacon, and even a final garnish of chives or scallions. Add some crusty bread and a simple salad, and it becomes a satisfying meal on its own.

Once you feel comfortable making this easy recipe, you can start creating your own interpretations. You might want to add some spinach, broccoli, or watercress. Or you could go back to the basics, sticking with leeks and potatoes alone in a proportion that suits your own tastes. If you like, leave out the dairy ingredients, substituting olive oil for the bacon, cream, and cheese; or go completely vegan by using canned vegetable broth in place of the chicken broth. Or explore other rich versions, maybe garnishing each bowl with a swirl of creme fraiche or sour cream.

This potato-leek soup is a perfect recipe for autumn. And you can go on enjoying it all the way through winter.

Potato-Leek Soup With Cheddar and Bacon

In a large saucepan, cook the bacon over medium-high heat until crisp. With a slotted spoon, transfer the bacon to paper towels to drain; set aside. Carefully drain off all but 1 tablespoon of the drippings from the pan.

Return the pan to medium heat. Add the butter and, as soon as it has melted, stir in the leeks, onion, carrots, and garlic. Saute, stirring occasionally, until softened, about 5 minutes. Stir in the flour until fully incorporated. Stirring continuously, gradually pour in the chicken broth.

Add the potatoes, raise the heat, and bring to a boil. Reduce the heat to maintain a bare simmer, partially cover, and cook, stirring occasionally, until the potatoes are tender, about 15 minutes.

Put the cheese in a large, heatproof mixing bowl. Stirring continuously, gradually ladle in about a fourth of the hot soup, continuing to stir until the cheese has melted and fully blended into the broth.

Return the cheese mixture to the saucepan. Stirring continuously, gradually pour in the cream and stir in the salt and pepper. Continue to cook, stirring frequently, until the soup is almost boiling.

Ladle the Potato-Leek soup into serving bowls. Garnish with the reserved bacon and chives or scallions.