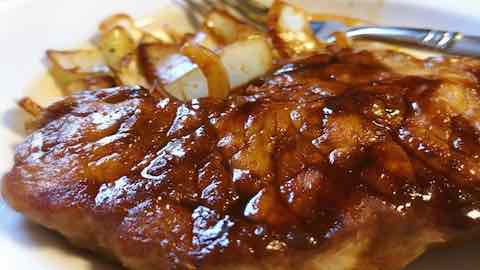 One of my all-time favorites, this Pork Chops with Caramelized Onions recipe complements the natural sweetness of tender, meaty pork with that of onions, which have been sauteed until their sugars caramelize -- a quality emphasized by the addition of maple syrup to enhance their deep, rich seasonal color and flavor.

The caramelized onions not only season the meat while it cooks but also become a combination of vegetable and sauce, adding to the pleasure delivered by every bite of pork.

For the best results, I buy the pork chops as a single four-bone rack to cook whole, which keeps the meat juicier. Whether you get it from a specialty shop or your supermarket meat department, ask the butcher to leave a little fat on the rack, which will not only baste the meat while it cooks but also turn crispy and delicious. To keep it from drying out, cook the meat just until it is done medium, registering 160 degrees F. on an instant-read thermometer. Then, before you cut it into chops, let it rest for about 10 minutes, during which time the hot juices will settle back into the meat and the residual heat will continue cooking the meat to perfect doneness.

This Pork Chops with Caramelized Maple Onions recipe as I give it here works perfectly to serve four people. But I have to admit that when I'm preparing it for my family at home I'll make as much as twice that quantity. The reason is simple. The next day, I'll slice the leftover meat from the bones and combine it with the cold caramelized onions as the filling for the most delicious autumn sandwiches you can imagine.

About 20 minutes before cooking, season the pork rack all over with salt and pepper.

Meanwhile, in a large, heavy skillet over high heat, heat the olive oil. Add the pork rack and sear it on all sides until browned, 7 to 10 minutes. Set aside.

In the same skillet, melt the butter over medium heat. Add the onions, ginger, cinnamon, and star anise.

Cook, stirring frequently, until the onions are golden brown, about 10 minutes.

Add the maple syrup and cook, stirring, until the onions are a deep caramel brown, about 2 minutes.

Add the cider to the skillet and stir and scrape with a wooden spoon to deglaze the pan deposits. Continue cooking, stirring frequently, until the liquid has reduced by about half, about 5 minutes longer. Adjust the seasonings to taste with salt and pepper.

Put the pork in a shallow roasting pan.

Spoon enough of the oven mixture over the pork to cover it completely, reserving the rest of the onions. Roast in the preheated oven until the meat reaches an internal temperature of 160 degrees F. on an instant-read thermometer inserted into the thickest part of the meat, not touching bone, about 40 minutes total. About halfway through that cooking time, spoon the remaining onions over the meat.

Remove the roast from the oven, cover loosely with aluminum foil, and leave to rest for 10 minutes.

To serve, use a sharp carving knife to cut the roast between the bones into 4 equal chops. Place them on individual serving plates, spooning onions and juices from the pan over each chop.