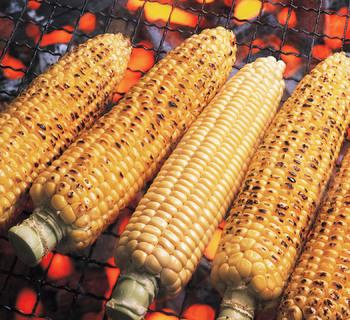 To me, corn speaks of summer more eloquently than just about any other vegetable, golden like the sun and bursting with the season's sweetness.

When corn is at its peak, as it is right now, there's no end to the ways you can use it.

In our restaurants, we'll scrape the raw kernels from the cob and cook them with butter, letting their naturally creamy juices thicken for a corn "risotto." We'll mix grated corn with mascarpone, Italy's tangy cream cheese, as a filling for the thumbnail-sized stuffed fresh pasta shapes called agnolotti. Or we'll saute kernels with fresh lima beans and maybe add some crumbled bacon for an old-fashioned American succotash, or make a creamy hot or cold corn soup.

Corn's versatility just goes on and on.

Of course, most home cooks just happily boil or steam corn and slather it with butter. Many also love to cook it on the grill, where the intense dry heat caramelizes corn's natural sugars to heighten its sweetness.

In fact, grilled corn is so flavorful and beautiful that I'll often use it as a starting point for still more recipes. I'm happy to share one with you here: a grilled corn salad combining the cooked kernels with string beans and cherry tomatoes, all tossed with a tangy, creamy, Greek-style yogurt-based dressing.

Try this salad as a side for any meal cooked outdoors, offering it as you would potato salad, coleslaw, or macaroni salad. Or, as I sometimes do, use it as a base for a grilled main course such as steak or fish, doubling the dressing quantities and drizzling the extra as a sauce over the meat or seafood.

However you serve the salad, its success depends largely on the quality of your corn. For my Southern California restaurants, I always buy wonderful organic white corn grown at in Rancho Santa Fe, just north of San Diego. But you can also find great corn yourself simply by buying it as close as possible to the place it was grown and as soon as possible after it was picked, before its sugars start turning into starch.

Look for farm stands in nearby rural areas, or frequent your best local farmers' market. Before purchasing, check the ears' cut stalk ends, which should look fresh and pale rather than dry and brown, the latter indicating that they weren't harvested recently.

Cook the corn as soon as possible after you get it home. If you like, you can even grill it a full 24 hours ahead, then cut off the kernels and reserve them in the refrigerator until just before you assemble and serve the salad. Then, get ready to enjoy a burst of summer sunshine on your plate.

Heat a fire in an outdoor grill.

Meanwhile, bring a large saucepan of lightly salted water to a boil. Fill a mixing bowl with ice and water and set it near the sink. Add the green beans or lima beans to the boiling water and cook until just tender, 3 to 5 minutes. Drain immediately and transfer to the bowl of ice water to stop the cooking and set the color. Drain well and set aside in a clean mixing bowl.

When the grill is ready, lightly brush the corn all over with olive oil. Grill until the kernels are evenly golden brown, turning frequently with tongs to prevent burning, about 5 to 7 minutes total. Remove the corn from the grill to a platter and set aside to cool.

Meanwhile, lightly brush the onion slices with a little more oil and grill them until golden brown, about 2 to 3 minutes per side. Transfer to a platter and set aside.

When the corn is cool enough to handle, use a sharp knife to cut off the kernels, steadying one end of an ear of corn on a cutting board while carefully slicing downward parallel to the cob to remove the kernels in strips. Transfer the corn to the bowl with the green beans or lima beans. Coarsely chop the grilled onion slices and add them to the bowl along with the tomatoes, feta, and arugula or parsley.

To make the vinaigrette dressing, put the yogurt, shredded cucumber, olive oil, lemon juice, dill, and sugar in a food processor fitted with the stainless-steel blade. Pulse the machine on and off until thoroughly combined. Pulse in salt and white pepper to taste.

Add the dressing to the vegetables and toss well until thoroughly combined. Serve immediately.