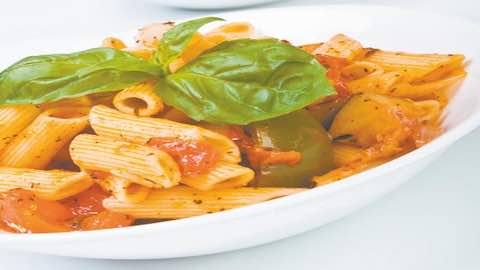 The sauce for this Italian Penne with Peppers & Eggplant-Tomato Sauce pasta recipe contains grilled eggplant, which blends into the tomato sauce and lends an intriguing flavor.

If the eggplant skin is charred only in a few bits for this Italian Penne with Peppers & Eggplant-Tomato Sauce pasta recipe, you can leave most of its peel on for more of a grilled taste.

Around the Mediterranean, tomatoes, peppers and eggplants are used together as the basis of countless dishes. Whether they are made into appetizers, side dishes or entrees, they are universally loved. They embody the lively color and flavors of the Mediterranean and often are cooked together with the region's favorite flavors -- olive oil and garlic. Most can be made in advance and can be served hot or at room temperature.

One of the simplest and best is Spanish escalivada, a Catalan specialty. The vegetables are simply roasted in pieces, mixed gently and served sprinkled with extra virgin olive oil, minced fresh garlic, salt and freshly ground pepper.

Similar salads are made in the Balkans, sometimes with chilies added. The vegetables might be finely diced or even pureed to form a spread, which gains a vivid red hue if the peppers chosen are red ones.

Moroccan cooks use the same vegetables to achieve a different effect. They dice eggplant small and cook it in oil with diced zucchini, crushed garlic, paprika and salt, and then simmer the mixture with diced tomatoes. Separately grilled peppers, both sweet and hot, are later added to simmer briefly with the other vegetables. Served hot or cold, this lively starter is sometimes flavored with cumin or vinegar.

Not surprisingly, Italian cooks turn the Mediterranean trio into pasta sauces. Eggplant and peppers might be grilled, and then part of the grilled eggplant is chopped and cooked in a tomato sauce. This savory sauce is tossed with penne or spaghetti and extra virgin olive oil and garnished with the grilled vegetables and fresh basil.

You could consider all these dishes cousins of Provencal ratatouille, the celebrated southern French dish that features eggplant slices, zucchini, onion and peppers fried in olive oil, and then simmered in a garlicky, herb-scented tomato sauce.

The Mediterranean trio is not reserved exclusively for vegetarian dishes. In Eastern Mediterranean countries, poultry or meat might join the vegetables. Cooks in Balkan countries simmer chicken pieces with browned eggplant, peppers and tomatoes. Lebanese cooks bake the same vegetables as a casserole with lamb cubes. A Turkish specialty called eggplant kebab is sometimes made as a stew featuring lamb cubes browned with chopped onions, simmered with diced tomatoes and served atop fried eggplant slices. The peppers come as garnish, either sweet ones in strips or hot ones grilled and served whole.

For cooks, the vegetables of the Mediterranean trio are the joy of late summer. Enjoy them while they are at the height of their season.

A 1-pound eggplant, slim enough to fit in broiler

Prick eggplant a few times with fork. Grill eggplant above medium-hot coals for about 40 minutes or broil it for about 25 to 30 minutes, turning often, or until its flesh is tender. Leave eggplant until cool enough to handle.

Remove eggplant skin if it is blackened and cut off cap. Halve eggplant and drain off any liquid inside. Cut about a quarter of the eggplant in dice; reserve. Puree remaining eggplant in a food processor.

Add 1 tablespoon oil to pan and heat it. Add onion and saute over medium heat for 5 minutes or until lightly browned.

Add chopped grilled eggplant to sauce. If sauce is too thick, stir in reserved tomato juice.

Cook, stirring often, for 10 minutes or until sauce is thick and well flavored. Stir in basil.

Transfer penne to a large shallow bowl and toss with 1 or 2 tablespoons olive oil.