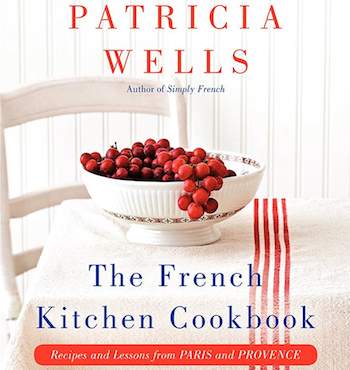 Two weeks residing in an 18th-century Provencal farmhouse owned by a world-renown cookbook author and former restaurant critic who enthusiastically teaches you to how to cook, enjoy fine wine, and find satisfaction in the kitchen (and in life). While it may sound like the plot summary of a delicious novel, it's not. For nearly 20 years, Patricia Wells, America's preeminent French culinary expert, has shared her home and kitchen with scores of "total novices" who, thanks to her efforts, have been "transformed into confident cooks."

Wells isn't just any cook. She is the former global restaurant critic of the International Herald Tribune, the only foreigner and female to serve as a restaurant critic for the French newsmagazine "L'Express," the author of 12 cookbooks, and the four-time winner of the James Beard award, the culinary equivalent of an Oscar.

Her cookbook, "The French Kitchen Cookbook: Recipes and Lessons from Paris and Provence

," is a reflection upon her years as a cooking instructor, her relationships with students (many of whom have become her dearest friends), and her appreciation of shared meals. Her goal is to show the home cook the "joys of combining good food, good wine and friends altogether around the table -- an experience we can enjoy day in and day out, any time."

Like any great teacher, Wells starts off with a short list of rules that should be followed in the kitchen, such as: fully reading and understanding a recipe before jumping in (you know you've done this before, to catastrophic results); creating a "mise en place," that is, having all equipment and ingredients laid out before you begin (so you don't realize halfway through a recipe that you're out of say, heavy cream); tasting as you cook; menu planning; aesthetics (Wells prefers white pottery and solid linens that don't compete with the food); and the "big role" wine plays "in our lives and in the cooking school." How can you not like a person who makes enjoying wine a rule?

The recipes, which are inspired by both Paris and Provence, cover the basics from soups, salads and vegetables to seafood, meat and grains, plus dessert. They include both U.S. measurements and European metrics, and are clearly written and easy to follow. While several are accompanied by color photographs, many aren't, which is disappointing. I found myself craving a luscious photo of Wells' dramatic Pavlova and her soul-warming Tartiflette: Potato, Cheese and Bacon Gratin.

For those who feel French cooking is too difficult and expensive, Wells proves that many elegant dishes can be both workable and affordable with recipes such as Pear, Fennel, Belgian Endive and Curried Walnut Salad; Eggplant with Chickpeas, Couscous and Tomatoes; Golden Almond-Crusted Sole Fillets; and Penne with Tomatoes, Rosemary, Olives, Artichokes and Capers.

Depending on your budget, you may opt against using imported European "00" flour or organic, free-range chicken. But you can't fault Wells for using the best ingredients available to her. You won't find any processed foods or short-cuts here -- stocks and dough are made from scratch. While I share her sensibility, I'd likely draw the line at making my own homemade curry powder (there's a recipe for that). Although I will try her recipe for hoisin sauce that she created after discovering that store-bought versions were loaded with additives.

As in most cookbooks, there are some recipes that are labors of love, such as the Beef Daube with Fresh Pasta Squares (which requires homemade chicken stock, several pots and saucepans, and a few hours of cooking time) and the Miniature Onion and Goat Cheese Tatins (you make your own Blitz puff pastry). Don't be intimidated -- even the lengthier, more involved recipes are doable.

Since many of the recipes call for cooking equipment that some home cooks might not have, such as an ice cream maker, canning jars and cheesecloth, Wells specifies the equipment needed at the top of each recipe. In several recipes she offers variations for ingredients (dried black currants for candied citrus or cherries for figs) or kitchen utensils. Don't have a cheese girolle? Use a mandoline or very sharp knife instead.

Most graciously, Wells includes secrets, tips and wine suggestions with many recipes: Got used vanilla beans? Dry them and combine with a jar of organic raw sugar for aromatic vanilla sugar. Want the secret to amazing Cranberry Walnut Bread? Top-quality honey. It enhances the flavor and helps keep the bread moist. Not sure which wine to pair with your braised cabbage with smoked sausage and mustard? Wells adores Domaine Ostertag's dry Alsatian Riesling.

I must admit that the chapter on desserts gave me pause.

Of the 19 recipes, 10 are for sorbet. I would have preferred replacing several of the sorbet recipes with other French classics that are not included, such as clafloutis, crepes or pots de crème.

If you're the type of a person who rushes past the recipe headnotes and chapter introductions, consider slowing down and savoring them instead. Here you'll find they contain valuable culinary insights as well as delightful anecdotes about Wells's life (her husband, Walter, is a master of fast and easy meals) and friends (Wells writes an homage to her mentor and friend, Julia Child.) Indeed, one of Wells's most cherished kitchen objects is Julia's former Art Deco style stove. Despite its having only one temperature -- "really hot" -- the stove is a source of constant inspiration for Wells.

"The French Kitchen Cookbook: Recipes and Lessons from Paris and Provence

" will make you feel like you're in the kitchen with a friend who instructs, encourages and salutes your cooking efforts whether big or small. That, and a glass of good wine, is something many home cooks could use more of.

"The French Kitchen Cookbook: Recipes and Lessons from Paris and Provence" by Patricia Wells