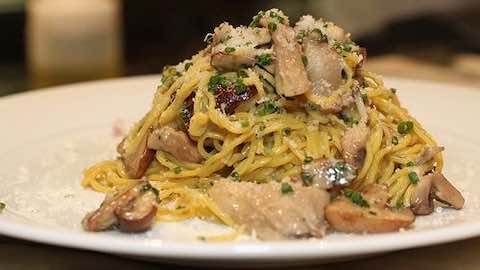 Whichever mushroom type you use, the most important factor in making the sauce for this Pasta with Mushroom Sauce recipe is to saute them in a hot pan large enough to prevent overcrowding. As for the pasta, that's really a matter of your choice.

To me, mushrooms are the perfect ingredients to serve. After all, "earthy" is the adjective people use most often to describe their flavor and aroma. They have such widespread appeal, too. Vegetarians find them intensely satisfying, even sometimes admitting that they taste "meaty." At the other end of the dietary spectrum, devout meat eaters who may turn up their noses at anything green on their plates, will often pile sauteed mushrooms on top of or alongside their steaks or chops.

In short, mushrooms have the power to satisfy just about everyone. And that's especially true when you combine them with some broth (chicken broth for the meat eaters, vegetable broth for vegetarians), a splash of port wine, and a little cream to make a luscious sauce for pasta.

In farmers' markets and well-stocked supermarkets today you can find a wide variety of mushrooms previously available only in the wild -- pale oyster mushrooms, meaty-tasting shiitakes and porcini, golden chanterelles, firm and flavorful cremini and Portobellos. Use any mix that appeals to you of those or other varieties your market sells. Or you can even make the sauce with good old cultivated white mushrooms alone.

Whichever type you use, the most important factor in making the sauce is to saute them in a hot pan large enough to prevent overcrowding, so they'll color a bit and develop their flavor before they start giving up their moisture. It's also important, during the final simmering of the sauce, to reduce it sufficiently so that it will be thick enough to coat the back of a spoon -- a sure sign that it will also cling well to the pasta.

As for the pasta, that's really a matter of your choice. Fresh or dried varieties work equally well. I do find, though, that the fairly robust sauce clings better to ribbon-shaped pasta such as fettuccine or linguine than to more delicate strands like angel hair.

Serve this Pasta with Mushroom Sauce recipe to your family and friends. And when they say how much they enjoy it, remember: Don't thank me; thank Mother Earth!

1 pound dried linguine, fettuccine, or other pasta ribbons or strands

Put the mushroom trimmings in a saucepan. Add the broth and bring to a boil over high heat. Reduce the heat to a brisk simmer and cook until the liquid has reduced by half, 15 to 20 minutes.

Pour the mixture through a strainer lined with cheesecloth into a glass mixing bowl. Discard the mushroom trimmings.

Set the broth aside.

In a large pasta pot, bring salted water to a boil.

Add the port wine, stirring and scraping with a wooden spoon to deglaze the pan deposits, and simmer briskly until it reduces to a syrupy consistency. Stir in the mushroom broth and simmer briskly until the sauce begins to thicken, about 5 minutes. Stir in the cream and continue simmering until the sauce is thick enough to coat the back of a spoon, about 5 minutes more. Season to taste with salt and pepper. Remove the marjoram sprig.

Meanwhile, add the pasta to the pot of boiling water. Cook until al dente, tender but still slightly chewy, following the time suggested on the package.

Drain the pasta and add it, still dripping, to the pan of sauce. Toss quickly. Transfer the pasta and sauce to serving plates or shallow pasta bowls and sprinkle with Parmesan.

Garnish with a little fresh marjoram and serve immediately.