Parsnips with Horseradish and Chives 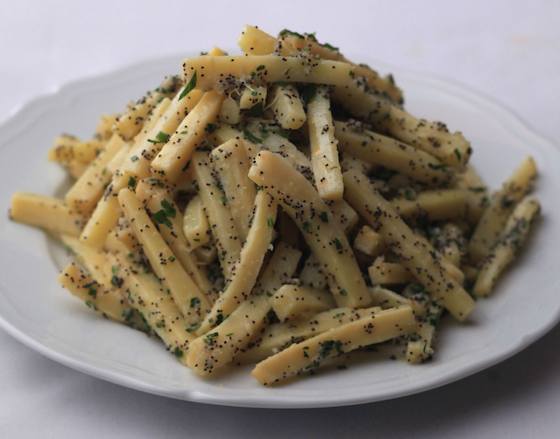 This earthy, complex parsnips with horseradish and chives recipe make for the perfect side dish

Parsnips are a quintessential cold weather vegetable. They look like carrots but are white and somewhat sweeter, characteristically starchy with a hint of citrus.

Like many of the tastiest foodstuffs, parsnips were once a staple among the poor in Italy and elsewhere in Europe. When the potato came from the New World and disseminated throughout the continent, parsnips fell out of favor. For centuries, they were used almost exclusively as animal feed.

Parsnips are complex in flavor, remarkably versatile and easy to cook. Their earthiness works well in broths and soups but also comes through when roasted or braised.

I like to slice parsnips thinly and cook them with rendered pancetta for a simultaneously crisp and toothsome pasta sauce. Don't crisp the slivers like potato chips, just cook all the way through and toss with spaghetti and a few ladles of pasta water.

I even serve parsnips instead of mashed potatoes as a side, adding Yukon gold potatoes and yams. The combination of sweet potato and parsnip might seem like it would be too sweet, but it creates the perfect balance.

This Parsnips with Horseradish and Chives recipe works next to a turkey or with poultry or braised meet for weekday meals. It beautifully captures the flavors of autumn.

Parsnips with Horseradish and Chives

Parsnips with Horseradish and Chives Ingredients

In a large roasting pan, toss the parsnips with the 4 teaspoons olive oil and salt and pepper to taste.

Add the prosecco, and stir. Place the pan in the oven and roast, stirring once or twice, until the parsnips are tender and the prosecco has been absorbed, 25 to 30 minutes.

Meanwhile, heat the butter and remaining 1/4 cup oil in a small saucepan over medium heat. When the butter has melted, remove from the heat and stir in 1/4 cup of the horseradish. Add the parsley, chives and poppy seeds, and season with salt and pepper.

Pour the horseradish-herb butter over the warm roasted parsnips, and toss to coat.

Serve in a warmed shallow bowl with the remaining 1 cup horseradish on the side.

This parsnips with horseradish and chives recipe excerpted from "Molto Batali