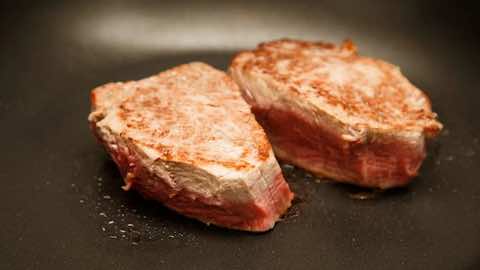 In this traditional Austrian-inspired pan-seared pork chops with mustard, crispy onions and herbs recipe I share with you here a mustard crust is added to one side of boneless pork chops.

One of my favorite, easy ways to make a big impact with a cold-weather meal is to cook indoors the kinds of ingredients you would normally expect to be served hot off an outdoor grill in summer. More specifically, that could mean serving hearty pork chops or steaks. After all, being warming, robust, and satisfying, they make good sense as winter main courses. And preparing them indoors can be even easier than cooking them in your back yard.

One of the best ways I know to prepare steaks and pork chops is to cook them right on your stovetop by pan-searing them.

An easy technique to master, pan-searing is also sometimes referred to by the older term pan-frying. But, unlike frying, pan-searing calls for relatively little oil or fat -- just a few tablespoons, enough to form an even film on the bottom of a heavy ovenproof pan that's large enough to hold all the chops or steaks comfortably in a single layer without crowding. (Packed in too closely, the meat would trap steam inside the pan, which would interfere with the searing process.)

Done over medium-high heat, pan-searing quickly forms a beautifully brown, flavorful, caramelized crust on the meat, which helps to seal in its juices. After searing on both sides, the meat continues to cook in the oven for a few minutes longer until it reaches the perfect degree of doneness.

The simplicity and speed of this technique gives you the opportunity to get creative with seasonings, sauces, and accompaniments for the meat.

In this traditional Austrian-inspired pan-seared pork chops with mustard, crispy onions and herbs recipe I share with you here a mustard crust is added to one side of boneless pork chops. Then, while the pork chops rest after cooking (which allows their bubbling juices to settle back into the meat), you have plenty of time to make a quick sauce from the pan deposits. Crispy onion strips, fried in advance on the stovetop or in a thermostat-controlled countertop deep-fryer, add a final garnish with irresistible crunch and flavor.

Of course, you'll want to make some mashed potatoes, a rice pilaf, or boiled egg noodles to complement the meat and capture every last drop of the delicious sauce. Add a vegetable of your choice, and you have yet another spectacular main dish perfect for a winter dinner party -- or for a special meal to serve to your family.

Preheat the oven to 425 degrees F.

Meanwhile, in a deep, heavy saucepan or deep-fryer, preheat 3 to 4 inches of vegetable oil to 325 degrees F. on a deep-frying thermometer or the deep-fryer's thermostat.

In a mixing bowl, season the onions to taste with salt. Add the flour and toss until the onions are well coated.

Working in batches if necessary to avoid overcrowding, shake off excess flour from the onions, carefully add them to the hot oil, and deep-fry until golden brown, 3 to 4 minutes, watching carefully to ensure the onions don't burn. With a wire skimmer or slotted metal spoon, transfer to paper towels to drain. Set aside and keep warm.

Season the pork chops to taste with salt and pepper. In a small bowl, stir together the Dijon and grainy mustards. Brush one side of each chop with the mustard mixture and lightly sprinkle the mustard-coated sides with flour.

Over medium-high heat, heat a heavy ovenproof saute pan large enough to hold all 4 chops without overcrowding. Add the 2 tablespoons peanut or vegetable oil and, as soon as it flows easily when the pan is tilted slightly, add 2 tablespoons of the butter. As soon as the butter has melted, swirl it around the pan and add the pork chops, mustard-coated side down. Sear, undisturbed, until their undersides are golden brown, about 3 minutes. Turn the chops over and cook until their other sides are nicely seared, about 3 minutes longer. Transfer the pan to the preheated oven and cook 6 to 7 minutes longer, until the chops are done but still slightly pink in the center, 145 degrees F. on an instant-read thermometer inserted into the center. Transfer the chops to a heated platter and cover with foil to keep them warm while you make the sauce (during which time they will still continue to cook slightly).

Add the broth and lemon juice or vinegar to the pan and, still over medium-high heat, stir and scrape with a wooden spoon to deglaze the pan deposits. Boil briskly until the liquid reduces by half, 4 to 5 minutes. Stir in the remaining butter and the chives, parsley, and tarragon. Taste the sauce and, if necessary, adjust the seasonings with a little salt and pepper.

Transfer each pork chop mustard side up to a heated serving plate. Stir the juices that have collected on the platter into the sauce, and then spoon the sauce over and around each chop. Garnish with crispy onions and serve immediately.