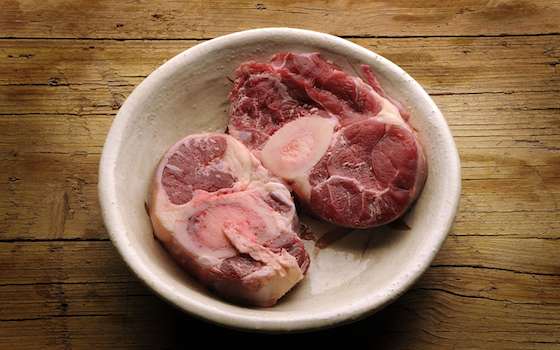 Have you ever tried to make something once (twice, three times, with three different recipes from three different cookbooks) and it never quite came out the way it was supposed to. And your husband, who's a better cook than you are (or at least better at actually following the recipe) tries the same from yet another cookbook and then another (at least we're persistent) and it never works, never quite tastes the same tender, delicious way it does in practically any Italian restaurant on any corner in any city in the world.

So, you put it in the category of "Don't try this at home." Ossobuco. It's never quite tender, never quite fall-off-the-bone delicious, Italian, melt-in-your-mouth restaurant perfect!

But, a couple of months ago, I was at the butcher in the farmers market and they had these perfectly lovely cuts of veal shank, really cute, and so (what was I thinking?) I bought them for the freezer. And last week, when there was nothing in the house, I defrosted them.

When Alan came home from work and asked what was for dinner, I announced, "Ossobuco."

"Really," he said with a smirk, "What are you thinking, you know that never works."

I trolled for a recipe. Struck out the first two times -- we'd already tried them but I'd just been sent a copy of "The River Cafe Classic Italian Cookbook

" (by Rose Gray and Ruth Rogers) and in it was a recipe that wasn't quite conventional, basically poaching the ossobuco on tomatoes. And I thought, Rosie's never wrong, I think I'll try it....

And it was absolutely perfect!

Now, if I could only convince Alan that we aren't on a diet the next time I make it, and talk him into his polenta as an accompaniment, we would have a perfect meal that you actually can make at home.

This Ossobuco recipe is served with risotto alla Milanese, one of the only times it is acceptable to have risotto accompanying a main course.

1 (14 ounce) can of plum tomatoes, drained of juice, coarsely chopped

Preheat the oven to 300 F. Choose a heavy-bottomed lidded ovenproof pan, large enough to hold the pieces of veal in one layer.

Season the veal and dust with sifted flour, shaking off the excess.

Heat the oil in the pan and brown the meat over a moderately high heat, adding more oil as needed. Remove the pan and set aside.

Wipe the pan thoroughly with kitchen paper. Lower the heat, add the butter to the pan and gently fry the onion, garlic and celery for 10-15 minutes, until very soft. Pour in the wine, bring to a boil and simmer until reduced by half.

Carefully place the ossobuco back in the pan on top of the vegetables, making sure the bones are placed upright so that the marrow cannot fall out during cooking.

The liquid in the pan should come halfway up the pieces of veal - if it doesn't, add more wine. Bring just to boiling, then cover with grease-proof paper and the lid, and cook in the lower part of the oven, checking and adjusting the temperature so that the liquid is at a gentle simmer.

The total cooking time should be 2 to 2 1/2 hours, after which time the meat should fall from the bone and be tender enough to eat with only a fork.

Serve the veal with the sauce and vegetables from the pan and sprinkle with the gremolata.

" by Rose Gray and Ruth Rogers