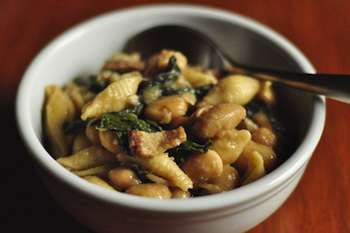 Let this One-Pot Pasta e Fagioli recipe simmer and bubble all afternoon. That gives the beans plenty of time to become soft and creamy while the sweet, caramelized onions melt into the rich bean broth. Your reward is a Pasta e Fagioli so thick you could stand a spoon in it and so hearty that the dreariest winter day will feel cozy.

This is my own riff on Pasta e Fagioli, partly inspired by the Rancho Gordo recipe for Florida Butterbeans with Caramelized Onions and Bacon. I've left out the tomatoes from the traditional Italian recipe and brought in some spinach for an extra boost of green. Feel free to include the former or take out the later if you prefer the classic soup.

This One-Pot Pasta e Fagioli recipe also makes a lot -- more than enough for two people to eat for dinner every night for a week. To freeze some for later, scoop out the portion you want to freeze before adding the pasta.

Pour the beans in a large mixing bowl and cover with cool water. Let sit at least 6 hours or overnight.

In a heavy stockpot or Dutch oven, fry the bacon over medium heat. Once all the fat has rendered, remove the bacon with a slotted spoon and reserve. Pour off all put one tablespoon of bacon fat. Cook the onions slowly with 1/2 teaspoon of salt until they caramelize and turn golden brown, 20-30 minutes.

Add the celery and cook just until the celery is softened, about 3 minutes. Add the garlic and cook until fragrant, about 30 seconds.

Remove half of the onion mixture and reserve with the bacon.

Deglaze the pan with one cup of water, scraping up any brown residue that has formed on the bottom of the pan.

Drain the beans and pour them into the pot with the remaining onions. Add the bay leaf and enough water to cover the beans and onions by one inch.

Cover the pot and bake in the oven for an hour. After an hour, check the beans every 15 minutes until they are completely soft.

Add the spinach to the pot and stir until it is wilted. Remove the bay leaf and the thyme stems. Taste and add more salt and pepper if desired.

This stew will keep for one week refrigerated.

Emma Christensen is a writer for TheKitchn.com, a nationally known blog for people who love food and home cooking.

Around My French Table: More Than 300 Recipes from My Home to Yours

Heart of the Artichoke and Other Kitchen Journeys