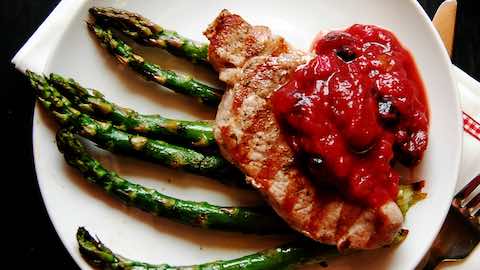 Rhubarb has been used in folk healing for centuries, and it continues to be one of the most widely used plants in Chinese medicine today. While it was thought to possess health attributes, specifically for the digestive system, rhubarb wasn't cultivated for food until the 18th century, in America. Rhubarb is easily identified by stunning pink stalks barbed with a bite so sour it's often tempered with sugar, earning the name "pie plant" early on for its use in pie and tart fillings. Today, its role extends beyond the pie plate -- it's "in the pink" because of its nutrient contributions.

Though sometimes classified as a fruit due to its close partnership with other fruits, rhubarb is actually a vegetable with several species in the genus Rheum of the buckwheat family. Celery-like stalks are brightly hued and beautifully streaked in red, pink and green. A one-cup serving provides 45 percent DV (daily value based on 2,000 calories per day) of vitamin K, which plays a role in blood clotting. Rhubarb is also a notable source of vitamin C, potassium, manganese, calcium and fiber. Note, however, that the leaves contain high levels of oxalic acid; consuming a large quantity can be toxic to humans and animals, and cause burning in the mouth or difficulty breathing.

The health benefits of rhubarb, which have long been utilized in traditional Chinese medicine, are now getting a nod from modern research. A review of Rheum palmatum, the species of rhubarb used in Chinese medicine, found potential anti-cancer properties in anthraquinones, polyphenol antioxidant compounds found in the plant. (Medicinal Research Reviews, September 27, 2007.) And a Scottish study published in the March 15, 2010 issue of Food Chemistry identified 40 different polyphenol components in British rhubarb. The study also found that baking it for 20 minutes significantly increased the yield of the polyphenols in the rhubarb.

Rhubarb is magnificent in a savory stew or tangy sauce or relish alongside roast chicken or pork. Not only will it add variety and kick up the nutrition, it will make any dish "pretty in pink."

Rub the pork chops with salt and pepper.

In an oven-proof skillet, brown the pork chops in oil. Remove to platter.

To prepare the rhubarb sauce, stir together rhubarb, apple juice concentrate, honey and nutmeg in a saucepan. Bring to a boil; reduce heat, cover and simmer ten minutes. Mix water and cornstarch and stir into the rhubarb mixture, cooking for an additional two minutes.

Top the pork chops with an additional one-third rhubarb sauce.