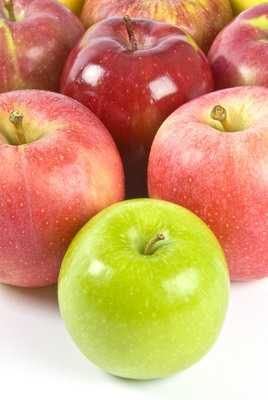 This Mississippi Apple Pie recipe is so easy that you could make it just about any weeknight for your family. Yet, it's so impressive that it would be perfect for special occasions.

When it comes to cooking apples, I like crisp varieties that hold their shape well and that have a good amount of tart acidity to balance their sweetness for a more complex and interesting flavor. One of my favorite choices is the widely available Granny Smith variety, and other good options including Jonathan, Cortland, or Gravenstein. Even if you have a less tart apple that will hold its shape well when cooked, such as Gala or Golden or Red Delicious, you can still get good results simply by adding a squeeze of lemon juice.

Once you have the right apples, it's time to start cooking them into a great dessert. And that doesn't mean you suddenly have to become a strudel-making expert -- or even make a traditional two-crust pie.

In fact, I came up with this great, easy way to make an Mississippi Apple Pie in a matter of minutes when I recently appeared on ABC's "Good Morning America" and was given the challenge of coming up with six dishes in less than an hour. For dessert, I grabbed some apples and a box of widely available cornbread mix from the pantry and went to work, improvising a recipe I playfully called Mississippi Apple Pie.

Actually, this Mississippi Apple Pie is more like a cobbler than a pie, because it has no bottom crust. That's good, too, for a couple of reasons. To be honest, I don't like pies with more crust than apple. Neither do I like bottom crusts that turn soggy. So a light, flavorful top crust of golden cornbread seemed like just the thing.

To make sure the apples finished cooking at the same moment the cornbread topping turned golden brown, I precooked the fruit in an ovenproof skillet, then poured on the batter and popped the whole thing into the oven. Just 15 minutes later, a perfect, beautiful dessert was ready to serve.

In a 10-inch (25-cm) ovenproof skillet, melt the butter over high heat. Add the apples and saute, stirring occasionally, until the apples have begun to soften and are nicely browned, about 10 to 15 minutes.

Sprinkle in the brown sugar, ginger, and 1 teaspoon of the cinnamon and continue cooking, stirring frequently, until a syrup forms and the apples are tender enough to pierce easily with a fork, about 5 minutes more.

Stir in the orange juice, arrange the apples in an even layer in the skillet, and set aside.

In a mixing bowl, combine the corn muffin mix, salt, and remaining cinnamon, stirring with a wire whisk to blend them.

In a separate bowl, whisk together the egg, milk, yogurt, and vanilla. Add the moist ingredients to the dry ingredients and stir just until combined.

Pour the batter evenly over the apples in the skillet. With a rubber spatula, smooth the surface.

Put the skillet in the oven and bake until the cornbread crust is golden brown and a knife inserted into it comes out clean, about 15 minutes.