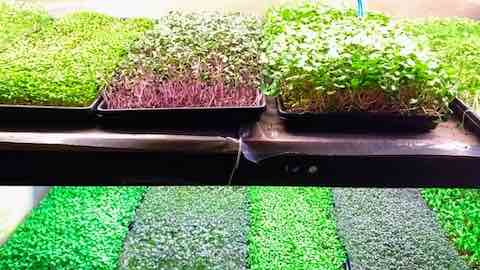 A relative newcomer to the produce scene, microgreens have sprouted into quite the culinary trend. Microgreens got their start in Southern California in the mid 1990s. What began as a few basic microgreen varieties like arugula, basil, beets, and cilantro, has burgeoned into dozens of varieties.

Thin and delicate, microgreens are the tiniest form of edible greens, micro-versions of salad greens, herbs, vegetables and edible flowers. Though short on height (at a mere one to two inches), microgreens are tall in flavor. Don't confuse them with sprouts, which are harvested just after a seed's germination; microgreens are the second phase of a seed's development. They have established roots and are harvested at the opening of the first leaves, from 10 to 21 days after the seeds are sown. Their rainbow hues--shades of green to fuchsia--denote their cache of health-protective plant pigments. Depending on the microgreen variety, they provide varying amounts of vitamins A and C, minerals and fiber.

Microgreens are such a new culinary trend that the science has yet to catch up with their health benefits, according to Gene Lester, Ph.D., USDA plant physiologist. Many varieties are immature versions of leafy greens, but others are the young leaves of vegetables like radishes or broccoli, thus their nutrition profile does not necessarily match that of the mature vegetable. For example, the nutritional value of microgreen radishes, which consist of young radish top leaves, doesn't equal the nutritional value of the mature radish root. However, there is some evidence that young leafy greens may be higher in nutritional quality than mature leaves. Lester points to a recent study he conducted on spinach, in which he discovered that younger leaves generally have higher levels of vitamins C, B9 and K1, and the carotenoids (plant pigments with antioxidant action) lutein, violaxanthin, zeaxanthin and beta-carotene than more mature leaves (, January 2010.)

Microgreens are all the rage in restaurants, and are becoming more available in specialty markets.

Microgreens are easily grown at home in a backyard or on your window sill. Experiment with an array of flavors, textures, and colors of micros like fennel, arugula or chrysanthemum. Then enjoy them in a salad, sandwich, burger or pizza, and definitely use them as a garnish or topping on most any dish. Whatever the mix, microgreens deliver plenty of healthy nutrients with refreshing punch and pizzazz.