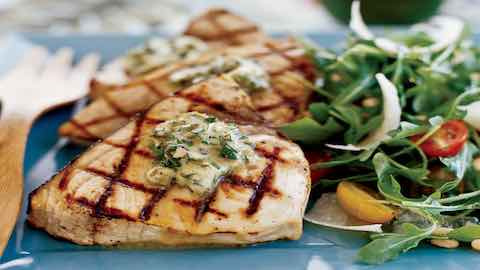 I find that grilling enthusiasts generally fall into one of two different camps. Some will go to great lengths, and take all the time they need, to produce delicious new dishes. Still others prefer to keep their grilling simple, even if that means relying on tried-and-true recipes.

Allow me to offer an approach that's likely to please both ends of the grilling spectrum: coating food with a flavorful glaze. All you have to do is prepare a simple glaze in advance and then, shortly before you put your main ingredient on the grill, brush it all over with that mixture, which forms a rich-tasting, slightly caramelized coating.

Glazes work especially well on quick-cooking seafood fillets, such as this Marinated Swordfish With Marmalade-Ginger Glaze recipe I share here.

The glaze itself is easy to prepare, made with ingredients you probably already have in your refrigerator or pantry: citrus juices for sweetness and acidity; wine vinegar for tang; a couple of spoonfuls of marmalade to sweeten the mixture, help thicken it to coating consistency, and caramelize deliciously from the grill's heat; ginger and garlic for extra flavor; and some oil to both flavor and enrich the mixture and help keep the food from sticking. Once you've used the recipe a few times, feel free to vary the ingredients with your own favorites. It's hard to go wrong if you choose compatible seasonings you love and follow the same proportions.

In other words, this marinated swordfish with marmalade-ginger glaze is a quick yet creative approach to grilling that you can use again and again.

4 slices swordfish fillet, each about 6 ounces and 1 inch thick

In a non-reactive saucepan, combine the lemon juice, orange juice, vinegar, marmalade, ginger, garlic, white pepper, and salt to taste. Bring to a boil over medium heat, stirring to dissolve the marmalade, and then simmer briskly, stirring occasionally, until the mixture reduces to about 1/2 cup and is thick but still slightly fluid, 7 to 10 minutes. Remove from the heat, transfer to a nonreactive bowl, and set aside to cool to room temperature. Whisking continuously, slowly drizzle in the oil. Cover and refrigerate until ready to use.

Before you're ready to cook the fish, preheat an outdoor grill, indoor grill, or ridged grill pan.

Return the glaze to a small saucepan and warm it gently over low heat until it is fluid.

When the grill or grill pan is hot, brush the swordfish on both sides with a little olive oil. Then, brush the fillets evenly with the glaze.

Grill the fish until cooked through but still springy to the touch, 4 to 5 minutes per side.