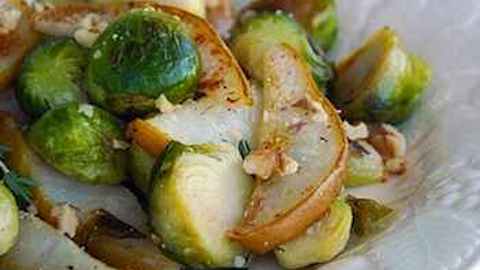 What exactly is the root of all this antipathy toward Brussels sprouts? Is it the color? Sometimes it's not easy being green. Or yellowish-green.

Is it the smell? You know what I'm talking about. Boil Brussels sprouts on your stovetop for 10 minutes and the neighbors will begin to wonder which farm animal you recently adopted.

Is it your mother's fault? If she served mushy, waterlogged, brown Brussels sprouts when you were a kid, it's not your fault that you hate them.

Though Brussels sprouts have been around since ancient times, they are named after the city of Brussels in Belgium, where they have been cultivated (and appreciated) since Medieval times. Brussels sprouts are members of the Brassica family, so they're related to broccoli, cabbage, cauliflower and kolrabi, admittedly none of which are going to win any popularity contests. That's why Brussels sprouts taste like cabbage and are sometimes referred to as "mini cabbages."

Sweet honey and pears act as a foil to the earthy Brussels sprouts.

In a large bowl, combine all ingredients (except walnuts) and toss until vegetables are well coated.

Lay vegetables in a single layer on a tin foil lined baking sheet (for easy clean-up).

Roast for 20 minutes, turning once, or until vegetables have a few brown spots.

1. Select brightly colored Brussels sprouts that are free of black spots or other blemishes, which indicate they are old.

2. Choose smaller sprouts, which tend to be nuttier in flavor and less "cabbagy" tasting.

3. DO NOT overcook them. Overcooked Brussels sprouts release more sulfur, which causes that smell. You know the one.

4. How you cook Brussels sprouts makes a big difference in how they taste. First par-boil Brussels sprouts and "shock" them. Partially boil the sprouts for 2-3 minutes, and then plunge them into a bowl of ice water; this will stop the cooking process and maintain the sprouts' vibrant color. Then you can saute them on the stovetop or roast them in the oven.