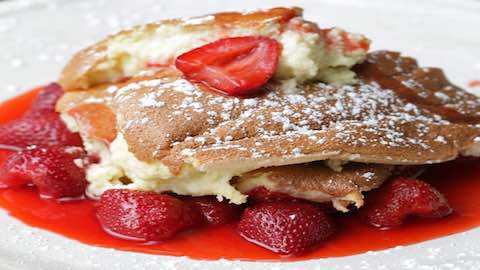 This Kaiserschmarrn recipe gets its royal lineage because, according to legend, it was first prepared more than a century ago for Austrian Emperor Franz Josef. When presented with it, he wondered aloud what sort of mishmash had been cooked up for him. "Kaiserinschmarrn" literally means "emperor's mishmash,"

Royally rich in flavor and texture, Kaiserschmarrn -- a souffle-like dessert -- comes by the more casual part of its name thanks to its presentation. After baking, Kaiserschmarrn is casually spooned in uneven chunks onto the serving plates, often over a sauce or compote of lightly cooked and sweetened fresh fruit.

Don't be concerned over Kaiserschmarrn's relationship to souffles, because this dessert is in fact incredibly easy to prepare. Yes, it is light and puffy thanks to beaten egg whites that are folded into an egg yolk base. But you don't have to tiptoe around your kitchen while it cooks, since the mixture is spread out in shallow pans for baking like a fluffy pancake rather than having to climb high up the sides of souffle dishes.

You can do much of the Kaiserschmarrn recipe preparation in advance. The egg yolk base and the strawberry sauce can both be made up to three days ahead and kept in the refrigerator. You can even fold in the egg whites and spoon the mixture into its cooking pans an hour or two ahead, keeping them covered in the refrigerator until baking time.

Speaking of the berries, don't be limited by what this Kaiserschmarrn recipe calls for. You can substitute raspberries, blackberries, or blueberries for the strawberries. Your favorite chunky applesauce recipe would be delicious, too. In the summer, try it with juicy plums, apricots, or peaches. You can also replace the rum in the base mixture with your favorite liqueur, and the raisins with other dried fruit, cut to raisin size.

1/2 cup plus 1 tablespoon sugar, plus extra for sprinkling

For the Strawberry Sauce (Makes about 1-1/2 cups)

First, prepare the souffle base up to 1 day in advance.

Put the egg yolks and 6 tablespoons of the sugar in a medium mixing bowl and beat with a wire whisk or a hand-held electric mixer until smooth and pale yellow in color. Whisk in the creme fraiche and rum until smooth. Hold a fine-meshed sieve over the bowl, spoon the flour into it, and tap the rim to sift it in, and then stir in the flour. Stir in the raisins. If not using immediately, cover the bowl and refrigerate.

Before cooking the Kaiserschmarrn dessert, preheat the oven to 425 degrees F.

Remove the bowl of egg yolk base from the refrigerator.

With a rubber spatula, gently fold the egg whites into the egg yolk mixture. Stop when the whites are fully incorporated but a few streaks still remain. With a large spoon, divided the mixture evenly between the 2 prepared pans. Sprinkle the surface evenly with a little more sugar.

Put both pans in the oven and bake until puffy and golden brown, about 12 minutes.

Put the berries, wine, sugar, orange juice and zest, lemon juice, and star anise in a medium saucepan. Over medium-high heat, bring to a boil, stirring frequently; then, reduce the heat and cook, stirring frequently, for about 5 minutes. Remove from the heat, cover, and set aside for 10 minutes.

With a spoon, remove and discard the star anise. Transfer the rest of the mixture to a blender. Pulse the machine until the mixture is smoothly pureed, taking care to avoid spattering. Pour through a fine-meshed strainer into a nonreactive bowl. Use immediately, or cover and refrigerate for up to three days.

Gently reheat the Strawberry Sauce if you have made it in advance. Add the fresh strawberry slices to the warm sauce and toss gently until thoroughly coated.

To serve, divide the sauce and berries evenly among 6 serving plates or shallow bowls. With a spatula or large serving spoon, dish up the souffle in large, irregular chunks, placing them on top of the berries. Serve immediately.