How To Cook a Pork Shoulder Recipe 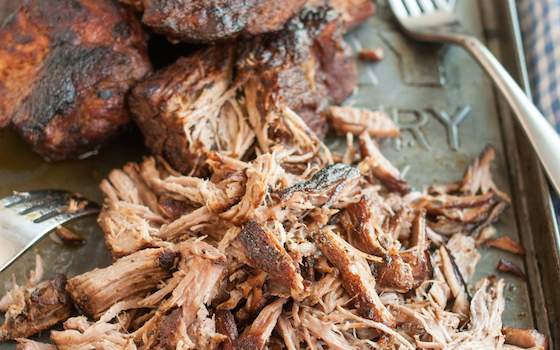 A pork shoulder, slow-cooked and pulled into succulent little shreds, can become a thousand different meals. Mix in some barbecue sauce and make pulled pork sandwiches or scatter the meat over pizza or toss it into a sauce for pasta. And that's just the start of the possibilities.

Look for pork shoulder or pork butt. (Don't be fooled by the name "butt"; it's actually part of the shoulder meat. The actual rear end is called the ham.) Go for bone-in or boneless, as you prefer. Bone-in shoulders take a little longer to cook but can make the meat more flavorful and succulent. Boneless cuts can be sliced into smaller chunks for easier handling and quicker cooking. I've done both many times and find bone-in or boneless fairly interchangeable.

You can use this method to cook any size cut you want, but I usually go for 4 to 6 pounds boneless or 4 to 7 pounds bone-in. This will give you roughly 10 cups of shredded meat, which is enough to feed a crowd or plenty for a week's worth of meals. Cooking a pork shoulder takes an afternoon of your time, so you may want to roast as much as you can at once and freeze what you don't think you'll use right away for future meals.

Heat the oven to 325 F. Place an oven rack in the lower-middle of the oven.

Trim off any large pieces of fat from the outside, but leave small pieces and the interior fat. If using boneless pork, cut the pork into several large fist-sized pieces. If using bone-in, leave the pork as is, on the bone.

Sprinkle the pork with salt, pepper and spices. Rub the seasoning into the pork with your fingers so that the meat is evenly coated on all sides.

If you have time, searing will deepen the final flavor of your pork and give it some textural contrast. Warm the oil in the Dutch oven over medium-high heat. Sear the pork on all sides, working in batches as necessary so as not to crowd the pan.

Onions, garlic, and other vegetables also deepen the final flavor of the pork, but are optional. If using, nestle them around the pork in the Dutch oven.

Pour the liquid and liquid smoke (if using) over the top of the pork. The pork should be only partially submerged, with some of the pork remaining above the surface of the liquid.

Set the Dutch oven with the pork over medium-high heat and bring the liquid to a simmer.

Once it simmers, cover the Dutch oven and transfer the whole pot to the oven.

Let the pork cook undisturbed for 2 hours, then begin checking it every half hour. Total cooking time will be 2 to 4 hours depending on the amount of pork and whether it's bone-in (which takes longer to cook). The pork is done when it is fork-tender: when the meat can be easily pierced with a fork without resistance and easily falls apart with a little pressure. If you're cooking pork on the bone, the meat should be falling off the bone. If in doubt, cook the meat another half hour; it's almost impossible to overcook meat with this method.

Lift the pieces of pork out of the liquid and transfer to a large mixing bowl. When cool enough to handle, use two forks or your fingers to shred the meat into pieces. Remove any large pieces of fat or bones.

Pulled pork will keep for 1 week in the refrigerator or for up to 3 months in the freezer.

Slow Cooker Variation: In a 5-quart or larger slow cooker, combine the meat with any vegetables and the liquid. Cover and cook on HIGH for 5 to 6 hours or LOW for 8 to 10 hours.

-- Plain pork (most versatile, season after cooking for use in any dish): bay leaf (used whole) with no other spices

How To Cook a Pork Shoulder Recipe, American Cuisine