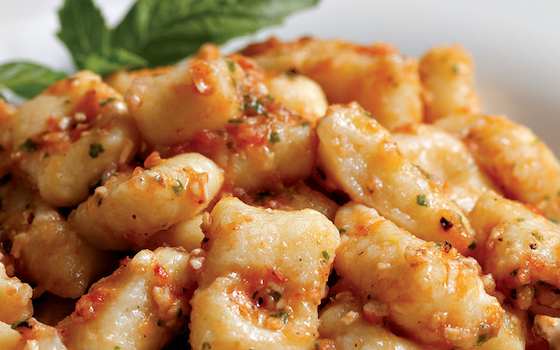 Traditional homemade gnocchi (little Italian dumplings) are made with just potato, flour, egg and salt. Be sure not to work the dough too much or the gnocchi will be tough. Toss them with your favorite sauce and dinner is served!

Pierce potatoes in several spots with a fork. Bake directly on the center rack until tender when pierced with a knife, 45 minutes to 1 1/4 hours, depending on the size and type of your potatoes. Remove to a wire rack and let stand until cool enough to handle, 15 to 20 minutes.

Scoop the insides out of the potato skins and push through a potato ricer fitted with a fine disc onto a clean counter. (If you don't have a ricer, mash the potatoes until smooth.)

Gather the potato into a mound on the counter, sprinkle with salt and let cool, about 15 minutes.

Put a large pot of water on to boil.

Pour egg yolk over the cooled potato and then sprinkle 1 cup flour on.

Use a bench knife or metal spatula to gently fold the flour and egg into the potatoes until combined (it will not look like dough at this point). Gently squeeze, knead and pat the dough until it holds together and resembles biscuit dough or cookie dough. The dough will be a little sticky; if it's very sticky, add more flour, about 1 tablespoon at a time, as necessary. Be careful not to overwork the dough: overworked dough will yield tougher gnocchi.

Pat the dough into a 1 1/2-inch-thick disk and then divide it into 4 equal pieces. Working on a lightly floured surface with lightly floured hands, roll each portion into a 24- to 26-inch-long "snake," 1/2 to 3/4 inch wide. Start at the center of the dough and roll out using your fingertips and very light pressure; gently pull the dough out as you roll. Cut the snake into 3/4-inch pieces. Use your fingertip to make an indentation (or "dimple") in the center of each gnocchi. Place the gnocchi on a lightly floured baking sheet as they are made. Repeat with remaining dough.

Adjust the heat so the water is at a gentle boil. Add about one-quarter of the gnocchi at a time. When the gnocchi float to the top, transfer to a parchment or wax paper-lined baking sheet with a slotted spoon. Continue boiling the gnocchi in batches until they are all cooked, returning the water to a gentle boil between batches. Serve immediately or sauté to create a golden crust (see tip below).

Recipe tip: To get a golden-brown crust on the outside of the gnocchi, cook about one-quarter of a batch of the gnocchi at a time in 1 teaspoon extra-virgin olive oil in a large nonstick skillet over medium-high heat, stirring gently, about 2 minutes.