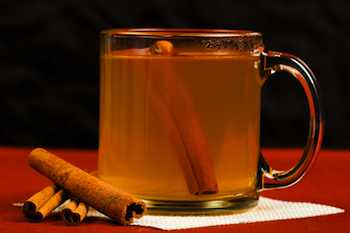 This easy to make, homemade hot apple-cinnamon cider offers many health benefits and is the perfect remedy for winter's cold.

Cinnamon is one of the signature spices of winter, warming the senses and marking the season's festivities with its familiar aroma.

Cinnamon comes from the brown inner bark of several trees from the genus Cinnamomum in the laurel family. Several species are sold as cinnamon, but Ceylon, or "true cinnamon," and Cassia (also called Chinese and Saigon cinnamon) are the most common. They are available as dried tubular sticks (quills) or ground powder. The oils in the bark contain cinnamaldehyde, among other substances that give cinnamon its antimicrobial and anti-inflammatory properties. Just two teaspoons of cinnamon provide 44 percent Daily Value (based on 2,000 calorie diet) for manganese, which helps the body maintain normal blood sugar levels and strong bones, and almost 10 percent DV of dietary fiber.

Seasoning high-carbohydrate foods with cinnamon significantly reduces the rise in blood sugar levels by slowing the rate at which the stomach empties after meals, according to a study in the American Journal of Clinical Nutrition. It may also help normalize blood sugar levels of people with type 2 diabetes by improving their ability to respond to insulin. Further results of studies on cinnamon's benefits for those with type 2 diabetes are varied. One well known 2003 Diabetes Care study found that just one gram of cinnamon daily not only reduced blood sugar levels, but also triglycerides, LDL cholesterol, and total cholesterol, while another study published in the European Journal of Clinical Investigation required three grams for similar benefits; however, a Journal of Nutrition study showed no benefit at all. Though it may be premature to deem cinnamon a treatment for type 2 diabetes, it does show promise.

Ceylon and Chinese cinnamon are very similar, but the harder-to-find Ceylon is a bit sweeter and more refined. Look for Ceylon in spice stores, ethnic markets and online. Cinnamon's pungent, sweet scent is the best freshness indicator, so when possible, smell it before buying. Cinnamon sticks store up to a year in a tightly sealed glass container in a cool, dark place, twice as long as the stronger-flavored ground cinnamon. A lovely enhancement to both sweet and savory foods and beverages, cinnamon is easily simmered in tea, cider and milk, sprinkled into dough and batter for breads and baked goods, and mixed into beans and curries for a unique ethnic twist.

Heat apple juice or cider in a large saucepan and bring to a simmer.

Strain and serve hot; garnish with cinnamon sticks and a dash of nutmeg if desired.

Around My French Table: More Than 300 Recipes from My Home to Yours

Heart of the Artichoke and Other Kitchen Journeys