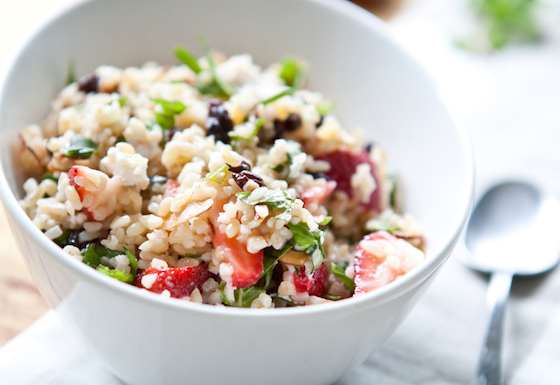 Growing up, my sisters and I ate a lot of casseroles, baked chicken, and occasional corn dogs or frozen pizza. My mom was a full-time teacher and I can only imagine how she managed as well as she did. Speed and ease were always of the essence. For that reason, I think this salad would have appealed to her, just as I think it will appeal to many of you. It's quick, only requires some minor chopping, and is pretty enough to make you feel like you've created something great -- all in under a half an hour.

If you're not familiar with bulgur, it's one of my favorite grains to work with lately. It's made by parboiling and cracking wheat berries. The resulting smaller size makes bulgur quick-cooking -- actually, it requires little real cooking at all: you simply boil water and let the grains steep. Bulgur is the cornerstone of many Middle Eastern dishes, and it can be used in much the same way you'd use rice or quinoa at home. When you go to buy it at the store, you'll notice different grinds: fine, medium or coarse. I always buy coarse because that's what I'm used to (and it makes for a heartier salad), but experiment to see which one you prefer.

I have been deep into whole grains lately, as I've been working on a book ("Whole-Grain Mornings: New Breakfast Recipes to Span the Seasons," out from in December 2013). I first thought up this particular recipe when we got our local co-op newsletter in the mail and there was a recipe for "Spring Tabouli," a riff on tabouli with grapes, citrus and apricots. My version was inspired by that flyer, and after a few kitchen experiments I became enamored of this strawberry tabouli with toasty almonds, creamy goat cheese, lemon juice, mint and basil.

You might wonder if this could rightfully be called tabouli. Of course, it's far from the traditional recipe and really only shares a few ingredients: bulgur, mint, lemon. But I think it shares a similar personality, and I'd approach serving it in much the same way: with fish, chicken or on its own with a substantial green salad. I've actually had leftovers for a light breakfast, and I can vouch for that, too.

Lay the almonds out onto a small rimmed baking sheet and toast until fragrant, 5 to 7 minutes. After they're done toasting, allow to cool.

Bring the water to a boil and then pour over the bulgur. Let stand until the bulgur has absorbed most of the water and has become tender, about 25 to 30 minutes. If there's any remaining water, simply drain and fluff the grains with a fork.

Set aside to cool.

In the meantime, in a large bowl combine the strawberries, mint, basil, goat cheese, and currants. Fold in the bulgur wheat, toasted almonds, lemon juice, olive oil and salt. Stir to combine.

Serve at room temperature or cover and refrigerate to serve cold.

I chose strawberries for this recipe because they've been really sweet (and inexpensive) lately, but feel free to swap fruits and use blueberries or raspberries, even pomegranate seeds would be nice.