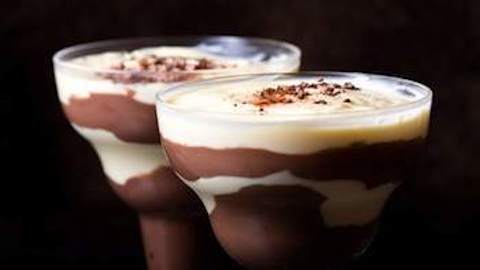 I'm happy to share my recipe for Frozen White and Milk Chocolate Mousse.

With its two contrasting layers of rich, creamy mousse and its crunchy sprinklings of cookie crumbs and roasted almonds, this dessert makes a spectacular impression.

Don't be alarmed by this Frozen White and Milk Chocolate Mousse recipe's length. Part of it consists of steps you repeat -- once for a layer of coffee-flavored white chocolate mousse, and again for a layer of milk chocolate mousse that, if you wish, you can spike with cognac or whiskey. From start to finish, the recipe can be ready to serve and enjoy in about five hours, though you can make it up to several days in advance. And the time you spend actually working adds up to no more than about an hour.

You don't really need any out-of-the-ordinary equipment to make the mousse, either. For a stylish presentation, however, I suggest buying the classic dessert molds I call for in the recipe: dariole cups. These look like metal or porcelain drinking glasses with smooth, slanted sides, and you can find them in most well-equipped cookware shops; or you can substitute similarly shaped drinking glasses. Even more simply, feel free to layer the mousse in attractive clear-glass dessert dishes or wine glasses and present them at table without unmolding.

A double-boiler will also help you to melt both chocolates. But, if you don't have one, you can successfully improvise by resting a heatproof bowl inside the rim of a saucepan, with the bowl's bottom suspended above, not touching, simmering water. You can also melt the chocolate in your microwave oven. Put the pieces in a microwave-safe bowl and heat at 50 percent power for 30 seconds at a time, stirring after each interval, until the chocolate is smoothly melted.

Let me offer one last word of advice. Before you start preparing this recipe, be sure to make room in your freezer for the cups or glasses to fit upright. You'll thank yourself not only for having a better-organized freezer but also for the delicious dessert you'll soon have!

With the butter, brush the insides of 6 individual dariole cups measuring 3/4 cup each, or sloping straight-sided drinking glasses of the same volume.

Using the bottom of a cup as a guide, draw 6 circles on a sheet of waxed paper. Cut out the circles inside the pencil lines. Place a circle in the bottom of each cup, and butter the paper. Arrange the cups on a baking tray. Set aside.

In the large bowl of an electric mixer using the whisk attachment, or with a hand-held electric mixer and a mixing bowl, beat together the yolks and sugar on high speed until very pale yellow and thick.

Meanwhile, in a saucepan, bring 1-1/2 cups of the cream to a boil. With the mixer on low speed and beating continuously, slowly pour the cream into the yolk mixture until incorporated. Divide into 2 equal portions in separate bowls, cover, and refrigerate until needed.

In a clean bowl with a clean whisk, beat the remaining 1/2 cup cream until thick enough to form soft peaks when the beaters are lifted out. Cover and refrigerate until needed.

Put the white chocolate in the top of a double boiler or a small heatproof bowl over but not touching very gently simmering water. When the chocolate is almost completely melted, turn off the heat and let the top pan or bowl rest over the water, stirring occasionally, until the chocolate is smooth.

In a small saucepan over medium heat, bring 1 of the yolk mixture portions back to a boil, stirring constantly. Pour through a strainer into a clean mixing bowl. With a rubber spatula, scrape in the melted white chocolate. Add the instant coffee. Rest the bowl inside a larger bowl of ice water and, with the whisk, stir until cool. Cover with plastic wrap and refrigerate for about 30 minutes.

Remove the whipped cream from the refrigerator and briefly whip again until it returns to the soft peak stage. With a rubber spatula, fold about half of the whipped cream into the white chocolate mixture. Spoon the mixture evenly into the prepared cups. Put in the freezer for at least 1 hour.

Repeat the procedure with the milk chocolate: melting it; reheating and straining the remaining egg yolk mixture; and stirring in the melted chocolate and, if using, the cognac or whiskey.

Remove the cups from the freezer. Distribute the chocolate cookies among the cups and top with the milk chocolate mixture. Cover each cup with foil, return to the freezer, and freeze for at least 3 hours or up to several days.

Before serving, remove from the freezer. Run a sharp, thin knife around the inside of each glass to loosen the mousse. Turn each cup upside down onto a serving plate and tap its bottom a few times to loosen. Unmold and remove the waxed paper circles. Serve immediately.