Frittata with Yogurt and Parmesan Recipe 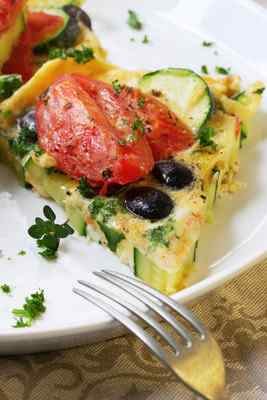 This potato-and-onion frittata recipe with yogurt & parmesan is incredibly fuss-free and easy to master.

Most people want a little something more substantial in the evening, however. An omelet with a robust filling would be good, but familiar omelets are usually made one at a time for each person, which is too much repetitive cooking to go through for a family of four.

A perfect omelet to make for a family dinner is a frittata, the Italian-style flat omelet. It's incredibly fuss-free, since you can make enough for four people in a single skillet, there's no flipping of the wrist to fold the omelet over the filling, and most of the cooking takes place in the oven, without any direct involvement on the cook's part. And, especially if you use a nonstick skillet, the frittata comes out perfectly, ready to cut into wedges and serve straight from the oven. Add some crusty bread and a simple side salad, and you have a complete, easy meal.

But the frittata's convenience doesn't end there.

Once you've mastered the simple technique in the recipe I share here, you can start making up your own variations. Try substituting or adding different favorite seasonal vegetables you like. Use other shredded, grated, or crumbled cheese along with or instead of the Parmesan. By all means feel free to include chopped or julienned cooked meat in the mixture such as crispy bacon, smoky ham, spicy sausage, plump little bay shrimp, or shredded rotisserie chicken.

And you don't even have to serve the frittata hot from the oven if you're not sure when everyone will be ready to gather around the table. It's also delicious lukewarm, or even cold, which makes this a perfect main dish for those last lingering hot days of summer.

In an 8-inch ovenproof nonstick skillet, heat the olive oil over medium heat until it is hot enough to swirl freely.

Saute, stirring occasionally, until the vegetables have softened and begun to turn a light golden color, about 5 minutes.

Stir in the garlic, remove the skillet from the heat, and set aside.

Put the eggs, yogurt, Parmesan, and salt and pepper to taste in the bowl of a food processor fitted with the stainless-steel blade. Process until smooth, stopping once or twice to scrape down the bowl with a rubber spatula. (Alternatively, combine the ingredients in a mixing bowl and stir together thoroughly with a wire whisk.)

Spread the vegetables evenly in the skillet and pour the egg-yogurt mixture evenly over them.

Transfer the skillet to the preheated oven and cook just until the eggs are set, 15 to 20 minutes.

Remove the skillet from the oven and set it aside to let the frittata settle for about 5 minutes.

Then, carefully invert a serving platter over the skillet and, using potholder to hold the platter and skillet securely together, invert them and lift away the skillet to unmold the frittata.

Cut into wedges, drizzle lightly with olive oil, garnish with Parmesan shavings, and serve hot, lukewarm, or even cold.