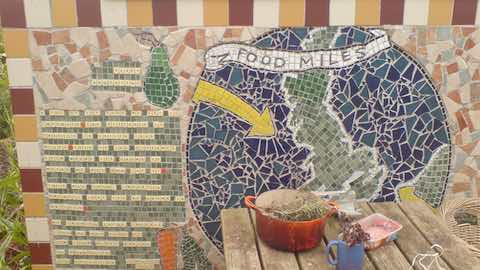 What is the 'Food Miles' Movement?

Since the term "food miles" originated in 1990, it has gained momentum right along with the local food movement, which aims to empower consumers to create a more sustainable food system. Fueled by efforts to lessen the impact of food on the environment, food miles advocates strive to eat foods grown locally, which have traveled fewer miles, in order to reduce their carbon footprint by reducing the release of greenhouse gas (GHG) emissions that may contribute to climate change.

What are 'Food Miles'?

Food miles is a measurement of how far food travels from the farm where it's produced to the table where it's consumed -- in other words, plough to plate. In the U.S., food travels an average of 1,500 miles, a 25 percent increase in the last three decades. This rise may be due to several factors, including the globalization of trade, and consumption of more processed and packaged foods, which require ingredients to travel to processing plants in far-away regions, then to distributors before they reach retailers and your grocery cart.

Though it seems obvious that less food miles release fewer GHG emissions, it's an oversimplified assumption that miles alone are an indicator of what's better for the environment. The environmental impact of food is dependent on many factors, most significantly, production of food.

According to a study published in Environmental Science and Technology in April 2008, food miles accounts for four percent of the U.S. food system's GHG emissions, while agricultural production is responsible for 83 percent of emissions, resulting from such things as pesticides, animal feed, and fuel.

The bottom line: What we eat is at least as important as the miles it travels. Yet food miles can empower your food choices. Sales of locally grown foods, such as those sold through farmers markets and community supported agriculture (CSA), are skyrocketing, paving the way for the reduction of food miles and the enjoyment of delicious, fresh produce.

How We Can Reduce 'Food Miles'

1. Learn what foods are in season in your area and try to build your diet around them. Check the Peak Season map at Epicurious.com

2. Shop at a local farmers market or CSA to enjoy local seasonal products.

4. Host a harvest party in your community that features locally available and seasonal foods.

5. Produce a local food directory that lists the local food sources in your area.

6. Buy extra quantities of your favorite produce when it's in season, and experiment with drying, canning and jammaking.

7. Plant a garden and grow as much of your own food as possible.