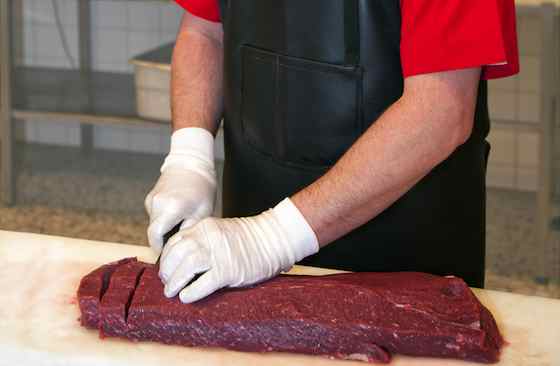 When it comes to grilling during the so-called dog days of summer, the hottest and muggiest of the seasons, smart cooks find ways to enjoy all of the smoky flavor and well-seared texture you get from food cooked over an open fire with as little human exposure to the heat as possible.

Serve this Fire-Roasted Beef Tenderloin recipe with something to soak up every drop of those juices and sauce: maybe a rice pilaf, some mashed potatoes, or just those slices of grilled bread. You'll enjoy spectacular results from your grill without spending very much time at all out in the heat.

This week, I share one great secret for achieving that goal: Grill a big piece of meat.

But doesn't a larger cut require longer cooking, meaning you'll actually wind up spending more time slaving over the grill? My answer is that you are correct about the cooking time, but not yet clued in to my strategy.

So please let me share that secret now: You only want to expose the meat to the grill's direct heat for a brief length of time, just long enough to sear its surface beautifully and season it with a little smoke from the fire. While on slightly cooler days you might consider then moving the meat to a cooler part of the cooking grid away from the direct heat and covering the grill to complete the cooking, when it's uncomfortably hot outside it makes more sense to bring the meat indoors to your air-conditioned (I hope) kitchen to finish cooking inside a preheated oven.

That doesn't mean, of course, you've necessarily prepared an outdoor fire just for a few minutes of searing. You can still use the grill for other quick recipes, such as an appetizer of skewered shrimp; some slices or kebabs of fresh vegetables or oil-and-garlic-rubbed sourdough toasts to serve with the meat; and some grilled fruit or classic s'mores for dessert.

The simple two-step strategy of cooking the meat enables you to spend a little extra time giving it exciting flavor. I often like to flavor beef tenderloin, pork or lamb cooked this way with Asian spices. I prepare a well-seasoned liquid, concentrated by boiling to reduce it, and use half of it as a quick brush-on flavoring for the meat before it goes on the grill. Later, when the meat rests so its juices can settle after roasting in the oven and before carving, I simmer the remaining liquid to concentrate it even further, then enhance it further with the quick addition of rice vinegar, Chinese mustard and a touch of butter to make a sauce to spoon over and around the sliced meat.

Prepare a fire in an outdoor grill.

Preheat the oven to 400 degrees F.

Remove the beef tenderloin from the refrigerator to rest at room temperature until ready to cook.

Place the pan over medium-high heat and cook until the spices are aromatic, about 1 minute. Reduce the heat to medium and stir in the tamarind paste, honey and red curry paste. Carefully pour in the Madeira and cook, stirring and scraping frequently with a wooden spoon to deglaze any pan deposits, until the mixture reduces to a syrupy consistency, about 5 minutes.

Stir in the broth, raise the heat to maintain a brisk simmer, and cook until the mixture has reduced by half, about 10 minutes.

Transfer the mixture to a blender and, taking care to follow manufacturer's instructions to avoid spattering of the hot liquid, process to puree. Pour the mixture through a fine-meshed stainless-steel sieve into a heatproof bowl. Set aside.

Brush the tenderloin with the remaining 2 tablespoons oil and season lightly all over with salt and pepper. Grill just until evenly seared all over with grill marks, 1 to 2 minutes per side, turning with long-handled tongs.

Transfer the meat to an ovenproof saute pan and pour half of the strained liquid over the meat, reserving the rest.

Put in the preheated oven and roast until the desired doneness is reached. For medium-rare, the meat should register 130 to 135 degrees F on an instant-read thermometer inserted into the thickest part, about 5 minutes. Transfer the meat to a cutting board, cover with foil, and leave to rest while you prepare the sauce.

Put the remaining strained liquid in a saucepan over medium heat and simmer until thickened to sauce consistency, 7 to 10 minutes. Meanwhile, in a small bowl or cup, stir together the rice vinegar and mustard powder until smooth.

With a wire whisk, briskly stir the mustard mixture and butter into the sauce.

With a sharp knife, cut the tenderloin across the grain into thin slices. Arrange on serving plates and spoon the sauce over and around the beef.