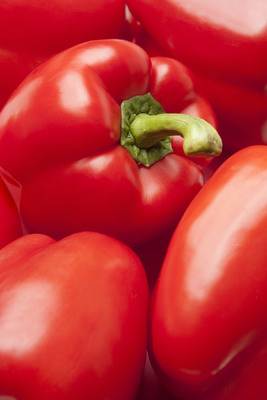 My recipe for Fettuccine with Roasted Red Peppers will show you just how easy it can be to serve pasta whenever you like -- even at every meal!

This Fettuccine Pasta Recipe with Roasted Red Peppers is a very simple recipe, true to the way so many Italians like their pasta. And it's quick, especially because so many supermarkets today sell packaged ready-to-use fresh pasta. (If fettuccine isn't available, feel free to substitute other fresh pasta ribbons such as tagliatelli, linguine, or pappardelle. Or use your favorite dried pasta, following the suggested cooking time on the packaging.)

Cooking fresh pasta takes next to no time. Just be careful not to overcook the pasta, checking it at the earliest time it might be done by fishing out a piece with tongs, allowing it to cool, then biting into it to make sure it's tender but still slightly chewy, what Italians call al dente.

You'll be surprised by how quickly the sauce comes together, too, with the most time-consuming step being the few minutes it takes to roast the bell peppers. That leaves you free to elaborate the sauce any way you like: stirring in some minced anchovy fillets, pitted black olives, or drained capers; or topping each serving with sauteed or grilled chicken, fish, shrimp, or scallops.

Preheat the broiler and put them on a broiler tray. Broil them close to the heat, turning them several times, until their skins are evenly blackened and blistered. Carefully transfer the peppers to a paper bag, close it loosely, and leave until the peppers have cooled. Then, with your fingers, peel off the blackened skins from the peppers.

Slit open the peppers with a small, sharp knife and remove the stem, seeds, and veins. Cut the peppers into strips 1/4 inch wide. Set aside.

In a medium skillet, heat the olive oil over medium-high heat.

Add the onion and garlic and saute, stirring frequently, until translucent, about 2 to 3 minutes. Stir in the roasted pepper strips and red pepper flakes and cook about 3 to 4 minutes longer. Season to taste with salt and pepper. Remove and set aside about 1/4 cup of the mixture.

Add the broth to the remaining mixture in the skillet and bring to a boil. Transfer the ingredients to a blender and, taking care to avoid spattering following the manufacturer's instructions, blend the mixture until smoothly pureed. Return it to the skillet, cover, and keep warm.

Meanwhile, bring a large pot of water to a boil. Add a little salt and the fettuccine and boil until it is al dente, tender but still slightly chewy, about 1 minute for the freshest pasta or 1 to 2 minutes longer, following any suggested cooking time on the package.

Instantly drain the pasta and, while it is still slightly dripping, stir it into the skillet of pureed sauce. Stir in the thyme, vinegar, and reserved pepper mixture. Taste and adjust the seasonings, if necessary, with a little more salt and pepper.

To serve, mound the pasta in the centers of 2 large heated plates or pasta bowls, spooning additional sauce from the skillet over each serving. Garnish with cilantro and serve immediately, passing Parmesan cheese to add at the table.