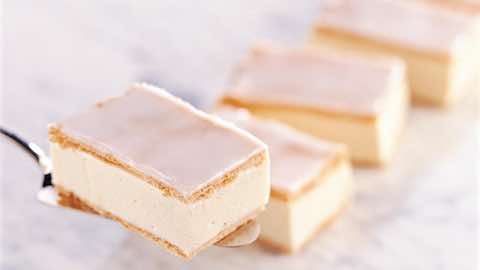 One of my favorites is a Viennese puff pastry we called cremeschnitten, literally "cream slices" or "cream sandwiches." You could also think of it as central Europe's answer to the French pastry known as a Napoleon.

Better still, with the help of excellent ready-to-bake puff pastry you can find in the freezer section of most supermarkets, it's surprisingly easy to do -- and a kitchen project that teenagers can easily make for Mom themselves, or on which younger children can give Dad a hand.

Your starting point for cremeschnitten is, of course, the puff pastry itself. Not so long ago, any dessert involving puff pastry began with the laborious process of mixing a dough and then painstakingly rolling it out, layering it with butter, folding it, chilling it, rerolling it, rechilling, and repeating over several hours to form the multiple layers that ultimately puff up and turn crisp and flaky when baked. Fortunately, the packaged commercial product sold today delivers excellent results without any of that labor. Just be sure to buy the pastry a few days ahead to avoid any last-minute rush, and to thaw it in advance following the manufacturer's package instructions.

Do that, and rolling out and baking the puff pastry should be a snap. Before it goes in the oven, though, take care to follow the recipe's instruction to "dock" the pastry -- a term that refers to pricking the dough evenly all over so it won't rise too high and result in an overly flaky, uneven pastry that will be difficult to assemble and eat.

My Cremeschnitten Puff Pastry recipe includes a filling of raspberry jam, one of my favorites, and a gelatin-thickened whipped cream-custard mixture flavored with fresh vanilla bean.

If you like, feel free to vary the filling to your own, or Mom's, taste, substituting another thick jam or marmalade and flavoring the custard with another compatible sweet spice or pure extract of your choice. Just be sure to think about combinations that go well together, such as orange marmalade and a touch of cinnamon, or cherries and a little cocoa powder.

As you'll see, this Cremeschnitten Puff Pastry recipe makes 12 individual servings. That means there will probably be enough for Mom to enjoy with lunch, afternoon coffee, and dinner -- plus an extra piece (stored covered in the refrigerator) to enjoy at breakfast the next morning.

1 vanilla bean, cut in half lengthwise

Preheat the oven to 375 degrees F.

On a lightly floured work surface, use a lightly floured rolling pin to roll out the puff pastry to a 12-inch square about 1/4 inch thick. With a sharp knife, cut the square into four 3-by-12-inch rectangles. Transfer to a baking sheet. With the tines of a table fork, lightly prick the dough all over to "dock" it, keeping it from rising too high. Bake until golden brown, 18 to 20 minutes. Transfer the baking sheet to a wire rack to cool.

Leave 2 of the puff pastry strips whole. With a sharp knife, cut each of the remaining 2 strips crosswise into 6 equal pieces. Set aside.

Put the cold water in a mixing bowl. Add the gelatin and soak until softened, following package instructions, 10 to 30 minutes depending on brand. Meanwhile, in a separate bowl, use a wire whisk or hand-held electric mixer to whip the cream until it forms soft peaks that drop slightly when the whisk is lifted out. Set aside.

Bring a saucepan of water to a boil; reduce the heat to a simmer. In a medium heatproof bowl large enough to rest inside the saucepan's rim without touching the water, combine the eggs and sugar. With the tip of a small, sharp knife, scrape the seeds from inside the vanilla bean halves and add the seeds to the bowl. Rest the bowl on top of the saucepan and, whisking continuously, cook the mixture until it begins to thicken, about 10 minutes. Remove the bowl from the heat. Carefully lift the softened gelatin leaves from the water, add to the egg mixture, and stir until dissolved. Gently fold the whipped cream into the egg mixture. Cover and refrigerate to cool and thicken for 15 minutes.

To assemble, spread 1/3 cup of the jam on top of each of the two whole 12-inch pastry pieces. Spread the cream mixture evenly on top of the jam. Carefully arrange the cut pieces of pastry side by side on top of each filled long piece. Cover loosely with plastic wrap and refrigerate at least 1 hour before serving.

To serve, use a sharp knife to cut between the top pastry pieces, down through the filling and the bottom pastry, forming individual portions. Hold a fine-meshed sieve over the pastries, add a spoonful of confectioners' sugar to the sieve, and tap to dust the pastries with sugar. Serve immediately.