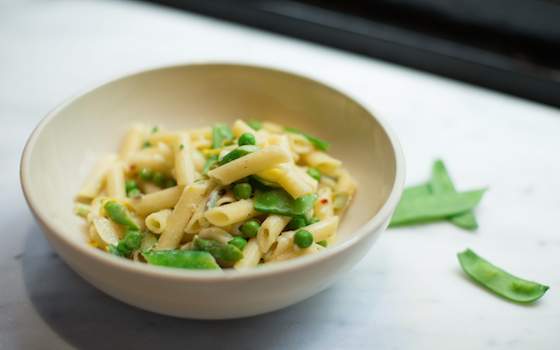 Peas are in their absolute prime this time of year. The snow pea is a legume that's grown in open fields during cool seasons and cultivated in the spring. Unlike garden and field peas, the snow pea is notable for its entirely edible pods that lack the disagreeable fiber found in other peas' pod walls. For this reason, the green shoots are often cut and served as a vegetable in many cultures. In China you will find them stir-fried with shellfish and fragrant spices. In Italy, we sauté them in garlic, and then chill them and dress with the juice and zest of a juicy lemon. This is the way snow peas are prepared in my Chilled Penne Pasta with Asparagus and Peas.

To perfectly complement the freshness of peas, I've added other seasonal vegetables: asparagus and ramps. Asparagus, a vegetable prized by many chefs, arrives with the first few days of spring. Since ancient times, asparagus has been one of the best health risk reducers around. With its anti-inflammatory and antioxidant nutrients, it's a truly special vegetable when in season. Ramps, on the other hand, are a little later to arrive. These wild spring onions have a short season, from April to early June. If they're not available, a mix of extra garlic, leeks and scallions makes a nice substitute.

Zest and juice of 1 lemon

Place a large pot of water on high heat and bring to a boil.

Season water generously with salt so it tastes like the ocean. Prepare an ice bath in a large bowl.

Add the pasta and cook one minute short of the package instructions. Drain the pasta and shock in the ice bath. Reserve some pasta water for the sauce.

Place a large sauté pan over medium-high heat. Add 2 to 3 tablespoons of olive oil and then toss in the garlic, crushed pepper flakes and snow peas. Cook for a few seconds before adding the asparagus, shelled peas and ramps.

Season with salt and pepper and cook 2 to 3 minutes, or until the asparagus is just barely cooked. Add some pasta water to create a sauce. Remove from heat and stir in the cheese to emulsify. Taste and adjust seasoning. Transfer to a bowl and allow it to cool.

Add the cooled pasta to the vegetable mixture and toss to combine with fresh mint leaves. Top with freshly grated lemon zest and juice, more cheese and a drizzle of olive oil. Store in the fridge until ready to transport or eat.