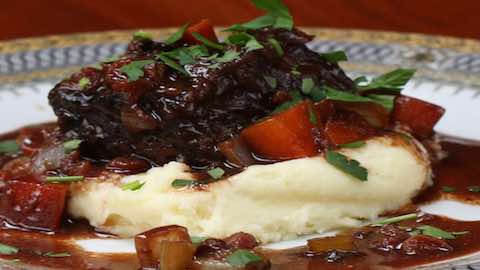 To me, holidays are all about family and food. That's why I like celebrating Passover, the Jewish holiday that retells the story of the exodus from Egypt through a beautiful ritual meal called a Seder.

For more than 25 years now, we've observed Passover by holding a Seder at Spago. We rearrange the entire restaurant into giant family-style tables, retell the miraculous story of the holiday, sing songs, and of course, eat a delicious traditional meal.

One of the most popular dishes year after year at our Seder is this Braised Boneless Beef Short Ribs recipe. That tough, gelatinous cut is a perfect choice for braising, turning meltingly tender and incredibly rich-tasting when cooked very slowly in liquid. I've never met a meat eater who doesn't love it. In fact, we often feature short ribs on the Spago menu throughout the year.

Braising is an ideal cooking method for any big holiday meal, because once you've assembled the dish you can leave it to bubble away gently on its own, which frees you to make other preparations. Better still, you can make the braise a day ahead, since it tastes even better reheated.

There are few special secrets to cooking the dish. As with most braises, it's important to brown the meat for a richer flavor and more attractive color. Usually, the meat is sprinkled with some flour, which aids in browning and also helps thicken the cooking liquid. But since flour is not allowed during Passover, when only unleavened bread may be eaten, here I substitute fine matzo meal.

For the cooking liquid, I use a combination of red wine -- also a featured element of the Seder, and so good with beef -- and broth. It's important to reduce the wine first to intensify its flavor and consistency. Look for low-salt broth, since that liquid will also reduce during cooking, giving you greater leeway to season the final sauce to taste.

An aromatic base of garlic, shallots, carrots, celery, leeks, tomato paste, and herbs adds wonderful depth and complexity to the meat and sauce alike. But there's one final flourish that, though not included in the recipe itself, I'd also like to share with you. Just before serving the short ribs, I like to grate a little fresh horseradish over them. The spicy, pungent root is also part of the Seder ceremony, meant as a reminder of the bitter life of slavery from which the Jews were freed. Here, however, I find it provides a delicious contrast to the meat -- an excellent combination of ritual and good food.

Pour the wine into a large saucepan or pot set over medium heat. When the wine is heated, carefully touch a long kitchen or fireplace match near the surface of the wine to set it aflame. Let the flames die out. Then, raise the heat and bring the wine to a boil; continue boiling until the liquid reduces by half. Remove from the heat.

Center a rack in the oven and preheat the oven to 350 degrees F.

Over medium-high heat, heat the oil in a Dutch oven or large casserole large enough to hold the short ribs. Season the ribs all over with salt and the crushed peppercorns. Dust the ribs with about 4 tablespoons of matzo meal and then, when the oil is hot, carefully transfer half of the pieces into the Dutch oven and sear until well-browned, 4 to 5 minutes per side. Transfer to a plate and repeat with the remaining short ribs.

Carefully remove all but 1 tablespoon of fat from the Dutch oven; reduce the heat to medium and add the garlic, shallots, carrots, celery, leeks, parsley, thyme, and bay leaves. Saute, stirring occasionally, until lightly browned, about 5 to 7 minutes. Stir in the tomato paste and cook, stirring, for 1 minute longer.

Add the reduced wine, browned ribs, and broth. Bring to a boil; cover the Dutch oven tightly, slide it into the oven, and cook until the ribs are tender enough to be easily pierced with a fork, about 2-1/2 hours. Every 30 minutes or so, lift the lid and skim off and discard any fat that's risen to the surface.

Carefully transfer the meat to a heated serving platter, cover with aluminum foil, and keep warm. Boil the liquid remaining in the Dutch oven until it thickens and reduces to about 2 quarts. Season to taste with salt and pepper and pass through a fine-mesh strainer; discarding the solids.

Pour the sauce over the meat and serve immediately.