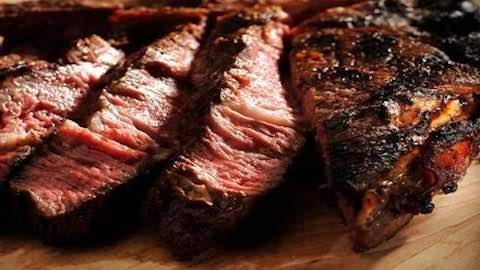 After an unseasonably cool spring, the summer grilling season is shaping up to be another scorcher.

It's not surprising that Good Housekeeping and Weber continue to offer solid advice and dependable recipes to satisfy America's ever-expanding appetite for quick and healthy meals.

But these days the hottest ethnic ingredients, such as chimichurri and wasabi, are expanding our palates, while sizzling techniques ranging from indoor pan-searing to stovetop smoking to outdoor Latin-style grilling to Japanese yakitori, provide just the ticket for adventurous cooks in search of the next sweltering heat wave.

The Japanese Grill: From Classic Yakitori to Steak, Seafood, and Vegetables

by Tadashi Ono and Harris Salat

Most homes in Japan don't have backyards, yet there remains a strong tradition of grilling.

Where do the Japanese grill if space is an issue? Most often cooks work over small indoor hearths or on stovetops.

The inconvenience is trumped by the cuisine's ingredients: the smoke and char of live-fire cooking marry well with Japanese ingredients such as soy sauce, miso and wasabi.

Ono, the executive at Matsuri in New York, begins to demystify many of the flavor combinations for an American audience. Wasabi, for instance, is served with sushi, but it's also a tasty accompaniment to beef.

Of course, the Japanese eat more than just the revered and heavily marbled waygu beef. Recipes include pork belly, duck breast and beef tongue skewers, calf's liver with ginger-sesame oil and chicken "oysters," a jewel of meat nestled on either side of the backbone by the thigh.

The authors also bravely touch on a concept that mystifies many American diners, taking a stab at "umami" -- a lip-smacking sensation caused by releasing concentrated amino acids and nucleotide flavor compounds. "You sense it whenever you bite into a chunk of fine Parmesan, a perfectly ripe heirloom tomato, or a sizzling porterhouse; it's that almost indescribable savoriness that beckons you to eat more," the authors write.

It turns out that fermented foods are just the type that contain these illusive umami compounds. Still, if given a choice between a bowl of edamame and a waygu rib-eye? Well, I must admit I'm already sharpening my steak knife.

Whisk together the soy sauce, garlic, olive oil and black pepper in a small bowl. This marinade will keep for up to 2 weeks in the refrigerator.

Pour the marinade into a baking dish or rimmed sheet pan. Lay the steaks in the marinade and flip them 4 times to generously coat all over. Marinate the steaks for 10 minutes.

Preheat a grill for a two-zone fire (medium and hot). Grill the steaks, covered, about 8 minutes for medium-rare this way: Start on hot heat for 1 minute, then shift the steaks to medium heat. After about 3 minutes, juices will begin to appear on top of the steaks. Turn and repeat the two-zone grilling on the other side. When the steaks are ready, they'll be browned and juicy on the surface, and the bone will stick out a bit, as the meat around it has shrunk. Test for doneness. Let the steaks rest for about 3 minutes. Slice the steaks against the grain and transfer to a platter. Pour off the juices released during slicing over the meat, dollop with wasabi sauce and serve.