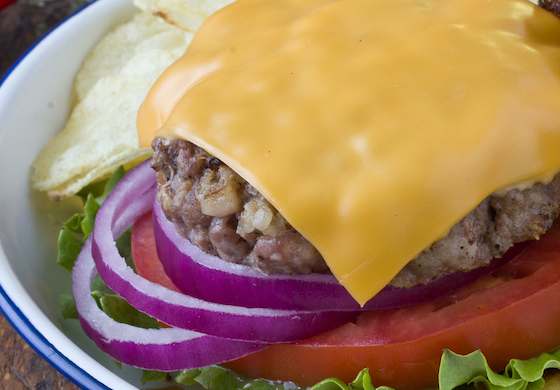 I don't know about the rest of the country, but Atlanta, where I live, seems to be the epicenter of a giant burger boom. Everywhere you turn, there is a new chef-owned burger joint promising the best beefy bite between buns you've ever tasted. But are those $20 burgers really worth it? Perhaps once you try this Beef and Bacon Burger Blend you won't think so.

I love a good burger as much as the rest of the meat-eating American population, maybe even more. From high-end restaurants serving a "house mix" to In-N-Out and Five Guys, I'll take them all. That being said, I've eaten some pretty bad ones too. The worst in memory were probably served at any number of my friends' backyard barbecues and ranged from homemade hockey pucks to thawed out mystery meat.

So I guess my question is this: Why is burger-eating a national pastime, yet home cooks continue to get them oh-so-wrong. I mean, you would think we might have it figured out by now! So I decided once and for all to get my burger-cooking facts straight and then share a recipe with you. The result is one of the juiciest, flavorful burgers I could have ever thought possible. And it is so foolproof that even my father -- the king of prodding, mashing, turning and burning -- could not mess it up.

So what's the big secret? Well, kids, what makes everything in this world better? BACON!! Not on top of the burger, as you would expect, but ground up in it, so that every single bite is infused with rich and smoky flavor. And since any burger lover worth his salt knows fat equals flavor, bacon fat means loads and loads of flavor.

I use the grinder attachment for my KitchenAid to make my own meat blends -- and I highly recommend it if you are in the market -- but you don't have to have your own equipment to make these burgers. If you don't have a grinder, you can either use your food processor or have the guys at your meat counter grind it for you. (Trust me, I have had my sweet guys at Publix fill plenty of very odd requests. It's part of my, and their, job description.)

There's not much else to write about these burgers. Per my friend Maggie (tester No. 5), "It's brisket. It's bacon. It's brilliant." That pretty much says it all.

On a large rimmed baking sheet, toss the cubes of beef and bacon together with a generous amount of cracked black pepper. Spread into a thin layer and freeze until very cold, at least one hour. Place the grinder attachments into the freezer to chill.

Assemble the grinder attachment fitted with the coarse disc and attach to the stand mixer. Nestle a mixing bowl inside a larger bowl filled with ice (to help keep the ingredients chilled) and place under the grinder. On medium high speed, slowly begin to feed the chilled meat through the grinder, using the food pusher to press the meat through the tube. Continue until all the meat is ground.

Turn meat out onto the same rimmed baking sheet and roughly divide into 6-8 even portions. Take 1 portion of meat and firmly roll into a ball the size of a softball. Place on the pan and press firmly to form a disc. Continue with remaining meat. At this point, the patties can be covered with plastic wrap and refrigerated for up to 24 hours.

To cook the burgers, preheat the grill on high heat until the temperature reaches 375-400 F, about 10-15 minutes depending on the grill. If desired, place a large cast iron griddle or skillet on the grill grates and preheat with the grill until smoking. (If the grill is large, keep one or two burners on low heat for finishing off the burgers.)

Sprinkle a very generous amount of salt (and more pepper if desired) over the top of the patties. Place the burgers, seasoned side down, on the grill grates/griddle. Cover and cook until the burgers have developed a nice charred crust, 3-4 minutes. Sprinkle the tops with additional salt and flip. Top with a slice of cheese if desired. Cover the grill and allow the other side to develop a good crust, about 3-4 minutes more. Check the center of the patties with an instant read thermometer and remove the burgers when desired temperature is reached. (Pull five degrees before ideal doneness is reached; burgers will finish cooking off of the heat.) Transfer the burgers to the cooler side of the grill to finish, if necessary.

Remove the burgers from the grill to rest for a minimum of 5 minutes before serving. Meanwhile, place the buns on the grill grates/griddle, cover, and cook until light golden and just toasted, about 1-2 minutes. Assemble burgers with all of the fixings and enjoy immediately.