by Clifford A. Wright (Zester Daily) 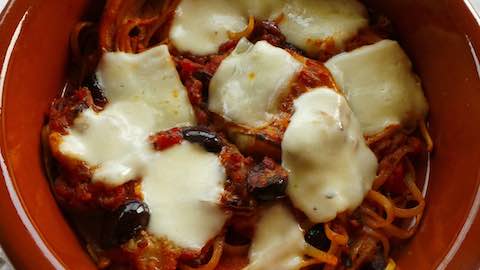 White Eggplant? This Oddball Bakes To Perfection. The exciting thing about buying a white eggplant is that it looks like an egg. Then once that ephemeral novelty evaporates you're still looking at an eggplant that needs to be cooked. So, what to do with it?

Unfortunately, because it tastes like an eggplant, what you'll end up doing with it is the same thing you do with any other eggplant -- and there are thousands of recipes for that. There may be a temptation to bake it whole so that you can surprise diners with the eggplant that looks like an egg. Again, unfortunately, the eggplant will collapse and discolor and not look at all like the raw uncooked version.

We have now come full circle and are simply dealing with an eggplant, for which, as I said, there are thousands of recipes. Although most botanists believe southeastern India is the place of origin of the eggplant, and some botanists make a case for China, as well as the Malay Peninsula, the place of origin is still unknown. It seems clear, though, that India is, at least, a secondary area of origin where it began a slow journey west.

It arrived in the Mediterranean by virtue of Arab agriculturists who brought the eggplant from Persia and perhaps from the Arabian Peninsula in the ninth or 10th centuries. The Arabs seem to have discovered the eggplant already growing in Persia shortly after their conquest of that country in 642 A.D., although several ancient Arabic names for the eggplant seem to come directly from other Indian names indicating that the plant may have arrived in the Arabian Peninsula in pre-Islamic times.

The Arabs have long been fond of the eggplant and medieval Arabic cookery manuscripts always have lots of recipes. The eggplant was treated with suspicion at first, but soon became a favorite vegetable. In fact, the medieval Arab toxicologist Ibn Waḥshīya around 904 incorrectly said it was fatal when eaten raw.

Sicily was one of the first places in Europe where eggplant was grown after being introduced by Arab farmers. Sicily is a fine place to find inspiration for an eggplant recipe. This baked linguine with white eggplant is not a traditional recipe and is admittedly labor intensive, but it is a dish for wintertime so I'm assuming you might like the idea of being indoors on a snowy weekend to bake some pasta.

1. In a deep fryer or an eight-inch saucepan with a wire fry basket, preheat the frying oil to 375 F.

2. Fry the eggplant until brown, 3 to 4 minutes a side. Drain on paper towels and set aside until needed.

3. In a flameproof baking casserole, heat the extra virgin olive oil over high heat, then cook, stirring constantly, the onion, garlic, and parsley until sizzling, 2 minutes. Add the anchovies and continue cooking for 1 minute, stirring until they have melted. Add the olives, stir, and add the tomatoes, eggplant, red chile, cayenne pepper, and season with salt and pepper. Reduce the heat to medium-low and cook, stirring occasionally, for 20 minutes.

4. Meanwhile, bring a large pot of water to a rapid boil, salt abundantly, then cook the pasta until al dente. Drain without rinsing. Transfer the pasta to the casserole and toss with the sauce.

6. Cover the casserole with the cheese and bake until the top of the casserole starts to speckle with light brown spots, 15 to 20 minutes. Remove from the oven and let cool for 10 minutes, then serve.