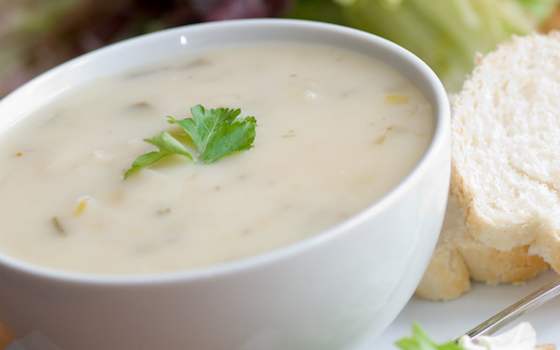 Why do soups, salads, and sandwiches go so well together? Especially at lunchtime, every cafe, diner, and deli seems to offer those combos. And kids everywhere love it when their parents dish up the classic cold-weather duo of grilled cheese and cream of tomato soup.

I think one of the reasons for that popularity is human beings enjoy variety, and these combinations give you multiple satisfying treats in one tidy meal. What wonderful contrasts they offer, too: hot and cold; smooth, soft, crispy, and crunchy; robust and delicate; savory, tangy, and even sweet; and so on, depending on the choices both cook and eater make.

Especially at this time of year, I like to start by choosing my soup, going for something warm and satisfying to ward off ever-chillier days. One of my favorite autumn and winter soups is the traditional French country pairing of potato and leek, which complements hearty, earthy tubers with one of the mildest, sweetest members of the onion family.

Some versions of the soup call for it to be pureed to creamy smoothness after cooking. I often prefer mine with a little more texture, chopping up the ingredients into small, uniform pieces that cook quickly. As long as you start with good ingredients and season the soup properly, there isn't any particular trick to cooking it correctly. But do be sure to rinse the leek whites thoroughly before you chop them, cutting them lengthwise in half and holding them under cold running water until you've removed every last trace of the sandy soil in which the vegetable is grown.

With a full-bodied soup like this, the best sandwich and salad partners tend toward the lighter side -- though that doesn't necessarily mean they shouldn't have enough character to stand on their own. I think the toasty, open-faced Italian treats known as crostini, which means "crusts," are ideal companions. To pair a perfect complement of flavor and texture to the soup, I like to top these oven-toasted, garlicky slices of rustic bread with a smear of whipped Brie, made simply by bringing the creamy cheese to room-temperature softness and then beating it until fluffy.

So, what about the salad? In this case, you don't want something that calls too much attention to itself, but it has to be able to stand up well to both the soup and the crostini. I suggest leaves with crispy textures and assertive flavors, peppery watercress and slightly bitter frisée (also known as curly endive), dressed with a simple mixture of olive oil, lemon juice, salt, and pepper.

There you have it: a fresh new take on that old diner favorite. And best of all, you don't have to decide which two of the three options you want to order!

1 garlic clove, cut widthwise in half

Over medium heat, heat a medium-sized saucepan with a capacity of at least 3 quarts. Add the butter and oil and, when the butter begins to melt and sizzle, add the shallots. Saute, stirring constantly, for about 30 seconds, taking care not to let the shallots brown. Stir in the leek whites, reduce the heat to low, and saute, stirring frequently, for 2 minutes. Stir in the broth, raise the heat to medium-high, bring to a boil, and cook for 4 minutes.

Stir in the potato. When the liquid returns to a boil, adjust the heat to maintain a brisk simmer and cook until the potatoes are soft, 8 to 10 minutes. Season to taste with salt and pepper.

Stir in the cream and simmer 3 minutes longer. Stir in the thyme, adjust the seasonings to taste if necessary, and serve immediately, ladled into warmed soup bowls. On side plates, arrange the Frisee-Watercress Salad and Whipped Brie Crostini.

Meanwhile, trim the rind from the Brie. Set the cheese aside to come to room temperature.

Generously rub one side of each bread slice with the cut side of the garlic. In a small bowl, stir together the butter and oil and lightly spread the mixture on both sides of each slice. Arrange the slices on a small baking sheet, lightly sprinkle with salt, and bake in the preheated oven for 4 minutes; then, turn them over and bake 2 minutes longer. Remove and set aside to cool.

Put the room-temperature Brie in the bowl of a stand mixer or a large mixing bowl. Using the mixer's beater attachment, or a hand-held electric beater, beat the Brie on medium-high speed until creamy and slightly fluffy, about 8 minutes.

Just before serving, generously spread the whipped Brie on each warm crostini.

Tear the frisee and watercress into bite-sized pieces and put them in a mixing bowl. Drizzle in the olive oil and lemon juice, season to taste with salt and pepper, and toss well.