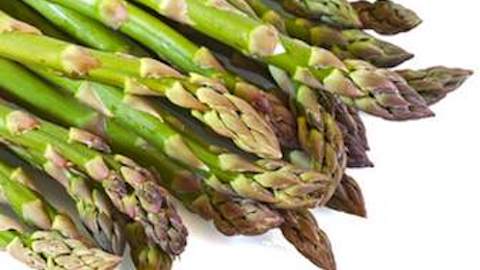 I know we're truly into springtime when farmers' market stands are piled high with beautiful bunches of asparagus. Those bright-green, tender-crisp stalks are a perfect taste of the season, so fresh and vivid.

Asparagus is related to lilies. Like those flowers, it grows from an underground root system known as a crown, which pushes up shoots into the sunlight. Early in the season, stalks will grow fairly slowly, requiring harvesting every five days or so. As the weather warms up and the days grow longer, a crown may send up new shoots that must be harvested once a day. No wonder asparagus becomes so abundant as we move toward early summer, the end of its season.

By the way, the sunlight that stimulates the growth of asparagus is also responsible for its color, producing chlorophyll. That explains how ivory-colored "white" asparagus is grown: Earth is mounded over the stalks to shield them from the sun, so chlorophyll doesn't develop.

While I love white asparagus and have my own special preparations for it, by this time of year the rapidly growing green asparagus predominates in markets. I prefer to use thicker stalks, sometimes labeled "jumbo" asparagus, rather than the pencil-thin variety. Larger stalks are easier to prepare and peel, leaving you with a more substantial vegetable. And, being thick, they take a bit longer to cook, offering you more leeway in reaching perfectly al-dente results, tender but still slightly crispy.

After the asparagus has been quickly boiled to the point at which the tip of a small, sharp knife can be inserted easily into the thick end of a stalk, I drain them quickly and immerse them in ice water to stop the cooking and set their color. Properly cooked in this way, they can be prepared in advance and then gently rewarmed without losing their texture or color.

Cooking asparagus al dente not only showcases its texture but also its flavor. Slightly underdone, asparagus has a pleasantly grassy flavor. Only when it's overcooked to the point of mushiness does the vegetable take on the more assertive taste that some people dislike.

Once cooked, the asparagus requires only the simplest of finishes to highlight its flavor. Some people toss it with butter, or an emulsified beurre blanc, or Hollandaise sauce. My favorite sauce is a traditional French-style vinaigrette dressing that includes a touch of mustard and some herbs, such as tarragon, chives, chervil, dill, or parsley. These mild-tasting fines herbes , as the French call them, complement rather than conflict with the vegetable's flavor.

Try my simple Asparagus with Tarragon Mustard Vinaigrette recipe, and you'll become a fan of asparagus season, too. Like me, you'll find yourself enjoying it again and again over the happy weeks to come.

For the Tarragon Mustard Vinaigrette (1/2 cup)

Select a large saucepan wide enough to hold all the asparagus horizontally. Fill it with water, salt generously, and bring to a boil over high heat. Fill a large mixing bowl with ice cubes and water and set the bowl on a counter nearby.

While the water is coming to a boil, prep the asparagus. Rinse the spears under cold running water. One at a time, hold a spear in on hand about a third of the way from its cut end. With your other hand, firmly grasp the cut end and bend it until the toughest part of the stalk snaps off. Discard that cut end. With a paring knife or vegetable peeler, peel off 1 to 2 inches of the tough green outermost skin from that end of the spear. Set aside. Repeat with the remaining spears.

When the water has reached a full rolling boil, carefully add the asparagus to the water. Cook until tender but still firm, when the tip of a small sharp knife can easily pierce the thick end of a spear, about 5 minutes from the time the water returns to a boil.

As soon as the asparagus is done, carefully drain and immediately immerse the spears in the bowl of ice water to stop the cooking process and set the green color.

Drain the asparagus thoroughly, patting it dry with a clean kitchen towel or paper towels. Transfer to individual serving plates or a serving platter.

Spoon some of the dressing lightly over the asparagus, passing more for guests to add to taste.

Put the oil in a measuring cup with a pouring lip. While whisking the vinegar-mustard-egg mixture continuously and briskly, start adding the oil in a very thin, slow, steady stream. As the mixture begins to emulsify, turning thick, smooth, and creamy, increase the flow slightly while you continue whisking, adding all the oil to complete the dressing.

Store in an airtight container in the refrigerator up to several days, reserving extra dressing for other vegetables or salads.