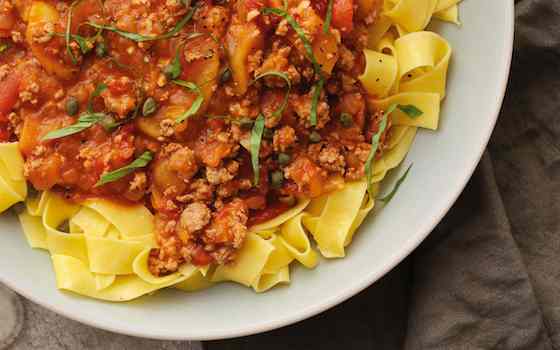 This recipe for Apple-Pork Ragu with Pappardelle that exemplifies Top Chef Stephanie Izard's clever way of mixing classic dishes into fresh reinterpretations. She suggests that the number of flavors involved make this a lot more fun and unique than your average pasta with meat sauce. Apples in your pasta sauce? You bet.

Reprinted with permission from Girl in the Kitchen

Yield: Serves 4 as an entree, 8 as an appetizer

One 15-ounce can whole peeled tomatoes, smashed by hand or chopped

1. Heat the oil in a large saute pan over medium-high heat. Add the pork and cook it until it browns, 5 to 7 minutes, breaking it into smaller pieces with a spoon. Set aside.

2. In a large saucepot or Dutch oven, lightly brown the bacon pieces over medium heat. Add the onions and garlic, and sweat them by cooking until the onions are translucent, about 2 minutes. Add the apples and wine, and simmer until the wine is reduced by three quarters.

3. Add the tomatoes, broth and browned pork, and bring to a boil. Reduce the heat and simmer, partially covered, until the sauce has thickened somewhat, about 15 minutes.

4. Meanwhile, bring a large pot of water to a boil. Drop the papardelle in the boiling water and cook until al dente, about 3 minutes, or according to the package directions. Drain and rinse.

5. Add the capers and basil to the sauce just before serving. Season the ragù with salt and pepper. Serve over the pasta.

Drink Tip: Apples work well in oatmeal, and likewise, this appley, pork-packed ragù goes hand-in-hand with oatmeal stouts. These yummy beers have enough body and plenty of creaminess to stand up to this rich dish -- but, being a stout, the slightly bitter malts will keep the pairing from being cloying.